The Best Campgrounds and RV Parks in Key West, Florida

Boyd's Key West Campground
"Amazing well kept, clean and extremely friendly staff"
Boyd's Key West Campground
"Beautiful campground! Camped here as a kid and still as a adult. A little piece of paradise!"
Boyd's Key West Campground
"Well maintained and super friendly staff. Cant wait to comeback!"
Boyd's Key West Campground
"Extremely kind and helpful staff! Extremely clean in every way! We will be back! "
Boyd's Key West Campground
"Great People and great campground. Cant wait to come back! "
Bluewater Key
"Outstanding! Sure it’s expensive - but you get what you pay for and this was January in the Keys. "
El Mar RV Resort
"Fantastic site right on the water. Half of the sites are waterfront and the other half are not. You won't find a cheaper waterfront site anywhere near by. Great concrete pad to land on and crushed gravel around that. Huge spaces with plenty of room to get into. Parked the trailer first try without a horrible amount of effort. Definitely a hidden gem and will be back again. "
Bluewater Key
"Excellent site, beautiful surroundings and great hosts. Would have given 5 stars but the pool was very small and in bad location. "
Leo's Campground
"Sites are nice and level, crushed coral & well maintained grass around. They're close, but enough room, as everything in Key West is. No reserved sites, but when you check-in, they show you what's available. Best ones are off the front/side street due to traffic and a equipment rental business (front st.), but not bad at all. FHU, good cable, kinda spotty WIFI, but not bad. All back-in, and sites "
Boyd's Key West Campground
"VERY tight spots. They did not offer help to our site, but after driving to our site we had to go back and request help to get our 40' in. The lots are "stacked" so the back end of our coach was besdie the front end of the lot behind us. We had to have cars moved to get in and out. Our awning was inches from the rv beside us. The bathhouse was clean, but old. The pool was well maintained. We did "
Bluewater Key
"Agree, if you can afford it, you won't find better. Look at their website. All RV spots near Key West are expensive, but it is only the difference for the best. - Review provided by RV Park Recommendations & Reviews Facebook Group"
Search Availability 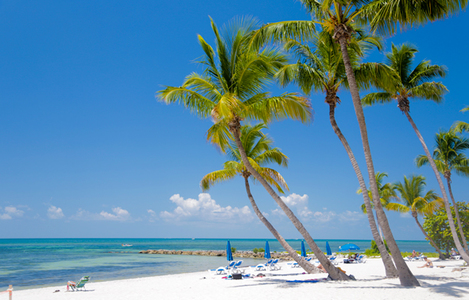 Known as one of America's premier island-destinations and Florida's most popular vacation spot, Key West is an island in the straits of Florida. The area enjoys a tropical savanna climate, with wet and dry seasons and clear, sunny skies almost year round.

The southernmost point in the United States, Key West is famous for watersports, lively nightlife, beaches and historic sites. Don’t miss Duval Street, one of the most energetic strips of shops, bars and cafes in all the land, and, for the more sober-minded, the Ernest Hemingway Home and Museum. Indeed, walking tours of Key West are the best way to see the island's intriguing architecture, courtyards and gardens. Start in the center of town at the Key West City Cemetery, which offers a glimpse of Key West's past and its offbeat sense of humor, as exhibited by gravestones that read, "I told you I was sick," and "At least I know where he's sleeping tonight.

There's no shortage of stellar attractions in Key West, each carrying the sensational island-vibe the region and its residents are known for. Meet the undersea residents of the area at the islands's first commercial attraction, the Key West Aquarium, or spend a few hours at the Key WestShipwreck Treasures Museum for a look into the island's oceanic and seafaring past and present. There's also plenty of opportunities to get out on the water for tours, canoeing, kayaking and expeditions through the dry Tortuga National Park Ferry and glass bottom boat tours. There's also wind surfing adventures over the stunning blue water, sail around the Key West Harbor or enjoying sport fishing, one of the region's most popular past times. The Conch Tour Train, the Key West Museum of Art and History, the Adubon House and Tropical Gardens and Key West Botanical Gardens are definite favorites, especially among residents to the area. Because of the city's absolutely breathtaking natural terrain, a colorful mix of blues, greens and tan sandy coastlines, many head to there to camp and enjoy the landscape or hit the skies for aerial tours. And for art enthusiasts, the town is filled with galleries and outdoor art like the CR Gray Sculptor.

As a coastal city, Key West enjoys a celebratory atmosphere that translates into a number of annual and ongoing events and festivals. These happenings normally surround the culture, art and creativity of the locals, drawing in thousands of visitors each year for festivals alone. Some popular attractions include: Fantasy Fest, a Halloween tradition and parade, Key West Fest Tuesday celebrating decadent foods before the season of Lent and LobsterFest. The Key West Songwriter's Festival is another favorite, but visitors don't have t wait for the festival, but the island is known to be a hub for musicians and continuous live music.

Many visit Key West by RV because there's no point to staying in this thriving natural landscape and being cooped up in a hotel room half the time! Travelers flock there in their campers to step out each day into a breathtaking natural scenery and fresh air, and so, the region is known for its world-class RV parks. One of the most popular campgrounds is Boyd's Key West Campground. Onsite, travelers can look forward to a long list of excellent attractions such as craft classes, yoga and aquasize classes, Ice cream socials, Potluck dinners, live music, poolside parties and food. There's also movie nights, line dances, and casino cruises for RVers to enjoy. Amenities at the park include: oceanfront campsites, 50 amp and 30 amp electricity, heated swimming pool, 24 hour security, free WIFI, marina, gift & convenience store, bathrooms and nearby city bus service. Not only Boyd's but every other campground offers visitors a wealth of onsite activities, amenities and each is close to local attractions. Ditch the hotel, and camp Key West!

Key West boasts a long list of excellent eateries and pubs, and for a good reason: located right on the coast and filled with immigrant culture from almost every continent, the island enjoys an amazing mix of culinary influences. Visitors and locals alike can look forward to Cuban flavors, as well as Mediterranean, Caribbean and Italian cuisine. Some popular spots include: Antonia's, El Siboney Restaurant, Seven Fish, Louie's Backyard and Nine One Five. And not just food, the island is known for its excellent brews and wines available at places like the Key West Winery and Wine-O Bar & Lounge.

A city known for its history of immigrants, Key West has a number of notable spots that both visitors and locals can take advantage of to truly appreciate and fall in love with this beautiful island. Of the well-known areas, Old Town draws thousands each year. The earliest Key West neighborhoods are broadly known as Old Town, designated as the Key West Historic District. This includes the major tourist destinations of the island, including Mallory Square, Duval Street, the Truman Annex and Fort Zachary Taylor. It is where the classic bungalows and guest mansions are found, Bahama Village, southwest of Whitehead Street, features houses, churches, and sites related to its African-American history.

Some antebellum structures have survived, including the Oldest House and the John Huling Geiger House, now preserved as the Audubon House and Tropical Gardens. Fortifications such as Fort Zachary Taylor, the East Martello Tower, and the West Martello Tower, helped ensure that Key West would remain in Union control throughout the Civil War. Another landmark built by the federal government is the Key West Lighthouse, now a museum. Two of the most notable buildings in Old Town, occupied by prominent twentieth-century residents, are the Ernest Hemingway House, where the writer lived from 1931 to 1939, and the Harry S. Truman Little White House, where the president spent 175 days of his time in office.

The Casa Marina area takes its name from the Casa Marina Hotel, opened in 1921, the neighborhood's most conspicuous landmark. The beautiful Reynolds Street Pier, Higgs Beach, the West Martello Tower, the White Street Pier, and Rest Beach dominate the shoreline.

Hope to see you soon!