The Best Campgrounds and RV Parks in Sacramento, California

Cal Expo RV Park
"There are 2 sections. The front section is paved, has some trees, is not level. The back lot is gravel, no trees, but will handle large RVs easily. FHU, very good over-the-air tv reception. Is in the city itself, convenient to shopping, restaurants and freeways. There is supposed to be wifi but it does not work. At all! There is a 30 day limit on your stay; must leave. Monthly rate includes electr"
Search Availability 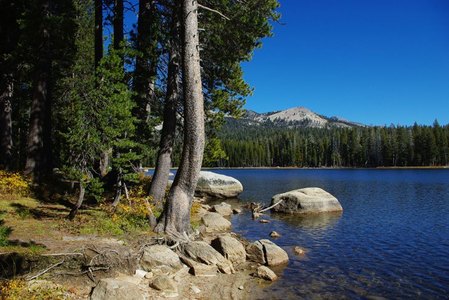 Sacramento is the capital of the state of California, and sits at the confluence of the Sacramento and American Rivers, in the state's Central Valley. The city enjoys a hot-summer Mediterranean climate and is known for its diversity, tree canopy and historic Old Sacramento. With 320 days of sunshine each year, this is the perfect spot for your next outdoor adventure.

Love the west coast and its rich historical landscape? Sacramento is definitely a great place to lose yourself in beautiful architecture and well-preserved history. Apart from Fort Sutter is Old Sacramento, home to cobbled streets and historic buildings dating back to the mid-1800's. After years of preservation, restorations and reconstruction projects, the district is now a substantial tourist attractions. Some of these historic buildings include the Lady Adams Building, built by the passengers and ship's carpenters of the ship Lady Adams and survived the Great Conflagration of November 1852. The town also has rides on steam-hauled historic trains and horse drawn carriages.

And no city in California can be explored without a dive into its art culture. You can look forward to bi-monthly Art Walk, held on the second Saturday of each month, and featuring exhibits from galleries and local businesses. With a host of art exhibits, local artists, food and wine, music, street fairs and special events, the Art Walk draws thousands to the city each month. The city is also known for its stellar theater landscape, with showings from everything from indie film screenings to international favorites from the Broadway Series. The downtown district near the Sacramento Convention Center is home to the Music Circus and the Community Center Theater, where you can catch shows like Wicket, Mary Poppins and other Broadway hits. Just a few blocks east, there's smaller theaters with locally written and produced shows featuring talent from the city and beyond. Plus, the city is home to  several top-notch performing arts groups, including the Sacramento Ballet and the Sacramento Opera and many more.

Sacramento is no stranger to excellent happenings and events, showcasing the cultural diversity and talent of its residents. On the theatrical front, the city is home to the Sacramento French Film Festival, a cultural event held every year featuring U.S. premieres of French films and classic masterpieces of French cinema; the Sacramento Japanese Film Festival; and the Trash Film Orgy, a summer film festival celebrating the absurd, B-movies, horror and monster. In the realm of film, the Sacramento Horror Film Festival showcases feature-length and short films, not to mention live musical and theatrical performances in the horror and macabre genres.

A hub for international cultural showcases, local art and performances, it's no wonder the Sacramento food scene is diverse, rich and filled with local creative flair. In keeping with its farm-to-fork model, sourcing foods for restaurants from local farms, the city hosts an annual Farm-to-Fork festival that showcases various grocers and growers in the industry. You can also look out for food-related community happenings like the 7th Annual Tomato Taste Off, The California State Fair Blue Ribbon Brunch, composting workshops, Diggin’ In School Garden Training and the Shuckfest for world-class oyster dishes. Sacramento is also known for its beverage culture, with specialty events including Cal Expo's Grape and Gourmet, Sacramento Beer Week, and Sacramento Cocktail Week. On a more brick-and-mortar front, Sacramento has a long list of excellent local eateries, drawing influences from Italy, Japan, Greece and even Spain. Some favorites include: Aioli Bodega Espanola, Claim Jumper Restaurant, Marrakech Restaurant and Buca di Beppo. There's also Shalimar Restaurant, Lalo's Restaurant, Piatti and Rick's Hacienda Restaurant.

The city's growing beer scene has made it a hotspot for micro-breweries, and festivals, with some popular breweries such as rack 7 Brewing Company, Rubricon Brewing Co., Oak Park Brewing Co., and Sactown Union Brewery seeing high local and visitor patronage. In addition to festivals in Elk Grove, Roseville, and Woodland, the city hosts the annual California Beer Craft Summit, an exposition dedicated to the art of brewing. Sacramento's contemporary culture is reflected in its coffee; an "underrated coffee city", Sacramento has above-average marks for local coffee with a number of community roasters and coffee shops like Insight Coffee Roasters, Old Soul Co., Chocolate Fish Roasters, Naked Lounge, Pachamama Roasting Co., and Identity Coffees.

Filled with plenty of green spaces, Sacramento is the perfect spot for a California camping trip. With a number of world-class campgrounds to choose from, you can expect great accommodations all within a short distance of the area's most well-visited attractions. Of the parks in the city, Sac West RV Park and Campground is the most popular, sitting within proximity to the California State Railroad Museum, Historic Old Town Sacramento, Capitol Museum, shopping, golfing, dining and even train rides. With friendly and knowledgeable staff and well-managed facilities like pull thru sites, full hook-ups, 30/50 amp sites, cable, WIFI and pets are allowed of course. You can also look forward to fully-furnished cabins and extended stay trailers. There's also the El Camino Mobile Home & RV Park, Stillman RV Park and Cal Expo RV Park in the area, and no shortage of dry tent camping sites at public parks. Whether you prefer no-frills camping or luxury facilities, there's certainly several options for you to choose from when camping Sacramento. Wake up to fresh air and acres of wide open spaces and greenery and then head to the hustle and bustle of the city area for an authentic taste of both worlds.

The museums in Sacramento spans almost every topic and industry, exploring the region's groundbreaking past. The city hosts museums about art, history, aviation and design, with the California Impressionists at the Crocker Art Museum being one of the most popular spots. You can also visit other landmark sites like the California Museum for comprehensive exhibits on the various aspects of California life; The Crocker Art Museum is the oldest public art museum west of the Mississippi River; the Governor's Mansion State Historic Park which was home to 13 of California's Governors, as well as the official residence for current governor Jerry Brown. There's also the Leland Stanford Mansion State Historic Park which serves as the State's official address for diplomatic and business receptions and offers guided tours to the public; the California Museum for History, Women, and the Arts, home of the California Hall of Fame; the California State Railroad Museum in Old Sacramento which has historical exhibits and live steam locomotives for visitors to ride; and the Sacramento History Museum, in the heart of Old Sacramento, highlights the area's history from the region's pre-Gold Rush history through the present day.

No matter what you enjoy doing, there's a ton of great activities, foods, brews and attractions to make your trip memorable. Grab your tent and sleeping bag and head out to Sacramento,because the only way to truly visit the city, is to camp it. See you soon!