The Best Campgrounds and RV Parks in San Antonio, Texas

Yanawana Camp
"At first glance, you'll wonder if you made a mistake because it's unlike most other RV camping spots. But once Clemente and Gabby greet you and show you to your spot, you'll find that being different is a GOOD thing. It's a lovely, quiet, well-kept little (5 pads) RV park. Although the final approach roads are a little tricky - and I wouldn't walk in that area - it's in a great location for all th"
Yanawana Camp
"This mini park is a gem. Just five RV spaces all with sewer water and power hookups. Friendly, helpful hosts. The location felt very safe I wanted a location with easy access to the Riverwalk bike park. This was perfect! Less than five minutes to the starting point at Mission Espada. "
Yanawana Camp
"Great place on the south side of San Antonio and close to the Spanish Mission Trail. Yannawana is small and very private. The hosts are very friendly and helpfull. The grounds are landscaped with drought tolerant plants. It is clear the owners have great respect for the earth. We were traveling to Big Bend and stayed here twice. We did go to Mission Espada and found it very interesting."
Yanawana Camp
"Campground is small but very secluded. Hosts were extremely helpful, both with getting setup in the camp and in sightseeing in San Antonio. We plan on coming back soon!"
Yanawana Camp
"Walking/biking distance from the southern end of the historic San Antonio River Walk, Yanawana Camp is a dream come true. An intimate, birders paradise, owners Gabby and Clemente welcomed us with helpful brochures and a quick overview of the area. This is a perfect location from which to delve into the history of the UNESCO World Heritage site composed of five Missions (including the Alamo) and "
Yanawana Camp
"Un accueil exceptionnel, compréhensif et aidant, nous avons eu des probltèmes avec notre VR et les proprietaires ce sont offert pour nous amener chercher notre pièce manquante. Il nous ont offert un ventilateur en attendant notre pièce, ils ce sont assuré que tout se passe bien. Il y a des oiseaux magnifique sur ce terrain, c’est tranquille et pour les amoureux du velo et bien vous serez servi, la"
Yanawana Camp
"Very nice, convenient, cozy camp with kind and thoughtful hosts. Their attention to detail was appreciated! We'd return in a heartbeat!"
Yanawana Camp
"Quaint peaceful rv campground, around the corner from mission trail. Owners extremely kind and give you plenty of local maps and info. Would absolutely stay here again. "
Yanawana Camp
"This is our second time to stay here. Great campground for those that are self-contained. It's small (5 sites), FH, immaculate, and near San Antoinio sites. Hosts live on-site and are very nice and accommodating. Lots of nature to view."
Yanawana Camp
"Great location for visiting San Antonio. Clean, secure, far enough from highway to provide a quiet and peaceful sleep and all the amenities are great. We’ll be back"
Yanawana Camp
"Location was perfect and the hosts were fantastic. Nice and quiet. "
Search Availability 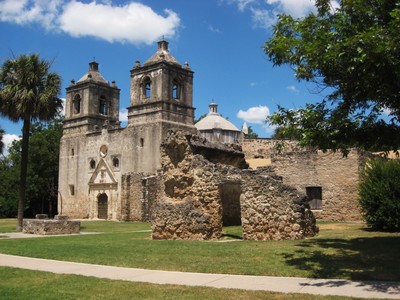 The city of San Antonio is located in the beautiful Central Texas area and boasts a humid subtropical climate, perfect for year-round camping in a thriving southern landscape. Thousands head there each year for the great sites, cultural events, attractions and food, but even more make the journey to San Antonio for great RV and tent camping.

There's no shortage of excellent southern attractions in San Antonio, many of them tied in some way to the area's rich Hispanic culture. For the history buff, there's a ton of historic sites such as The Alamo Mission in San Antonio ("the Alamo"), located in the downtown area. The mission is not only a hotspot of written and verbal history tours, but also for the artifacts that represent the Great Alamo battle.

The River Walk is another interesting and beautiful San Antonio attraction, meandering through the downtown are and giving city its additional nickname of "River City." On the walk, you can expect great craft eateries, shops and bars, as well as fine dining options, beautiful decor for lovely nights by the water and even stellar boat cruises. The San Antonio River extends from the "Museum Reach" through the "Downtown Reach" ending at Loop 410 South past Mission San Juan Capistrano. With so much length to it, you can just imagine who breathtaking the spot looks when it is transformed into an impressive festival of lights during the Christmas and New Year holiday period, suffused with the local sounds of folklorico and flamenco music during the summer, particularly during celebrations such as the Fiesta Noche del Rio.

The Downtown Area also features San Fernando Cathedral, The Majestic Theatre, Hemisfair (home of the Tower of the Americas, and UTSA's Institute of Texan Cultures), La Villita, Market Square, the Spanish Governor's Palace, and the historic Menger Hotel. The city is also home to the Fairmount Hotel which was built in 1906 and is in the Guinness World Records holder as one of the heaviest buildings ever moved intact. It was placed in its new location, three blocks south of the Alamo, over four days in 1985, and cost $650,000 to move!

For family or group camping trips, San Antonio is home to SeaWorld, located just 16 miles west of Downtown in the city's Westover Hills district, and neighbors the popular San Antonio Zoo. Get ready for exotic animals, beautifully tailored natural settings and breathtaking sea creatures, and be sure to hang back after your tours to take a walk through Brackenridge Park.

San Antonio is also home to several amusement parks including Six Flags Fiesta Texas, Splashtown and Morgan's Wonderland, a theme park for children who have special needs. Plus, there's Kiddie Park which is home to old fashioned amusement rides for children; it's the oldest children's amusement park in the U.S.

And no one visits San Antonio without visiting the first museum of modern art in Texas, the McNay Art Museum, and the plethora of other world-class museums and art galleries in the city. Other art institutions and museums include ArtPace, Blue Star Contemporary Art Center, the Briscoe Western Art Museum, Buckhorn Saloon & Museum, San Antonio Museum of Art, formerly the Lonestar Brewery, the Southwest School of Art, Texas Rangers Museum, Texas Transportation Museum and the Witte Museum and the DoSeum.

Other great attractions include the San Antonio Botanical Garden, Brackenridge Park, the Japanese Tea Gardens, the Sunken Garden Theater, and The Woodlawn Theatre and the Majik Theatre a children's educational theater.

For more of an outdoor adventure, you can enjoy the long list of excellent green spaces and attractions the city has to offer such as the Phil Hardberger Park filled with trails, picnic tables and group play areas. There's also great spots to explore like the Natural Bridge Caverns and Wildlife Ranch for tours of local an exotic wildlife, as well as walks through the beautiful Natural Bridge Cave system. And of course, even Texas natives head over to Enchanted Rock for a challenging early morning hike, or tube down the San Antonio River or talk a stroll through the San Antonio Botanical Gardens and Conservatory.

The city is also a hotspot for great attractions that spring out the area's authentic southern/Mexican culture and almost ongoing spirit of celebration. Some great events include: Remember the Alamo Weekend, Murphy's St. Patrick's Day River Parade & Festival, Six Flags Fiesta Texas Mardi Gras Festival and the Maverick Music Festival. And of course there's the SeaWorld Seven Seas Food Festival, Armed Forces River Parade, Culinaria, a wine and culinary arts festival and the Texas Folklife Festival. And this is certainly an incomplete list; the city celebrates dozens of other annual events on its community calendar, but visitors and locals alike can also look forward to monthly and weekly happenings around town from comedy shows to live music and food festivals.

Anaheim is home to a number of world class RV parks, perfect for every type of RVer. Whether you're a tent camping or pulling your trailer across the United States, you're sure to find something in the city that will make you feel at home; the Blazing Star Luxury RV Resort is the most popular area resort with comfortable luxury facilities, beautiful buildings, well-managed lawns and staff known for their stellar southern hospitality. Amenities at the park include: water, sewerage, WIFI, pull thrus, restrooms, showers, a pet area, playground, recreation room and pool access. The city is also home to dozens of public campsites at parks like the Garner State Park, McKinney Falls State Park and the Blanco State Park with amenities like toilets, fire rings, grills and picnic tables. Grab your tent and head out to one of these campgrounds to immerse yourself in a breathtaking natural terrain.

No matter your camping preference, you're sure to find something at San Antonio that will make you feel at home, plus there' a wealth of great attractions, activities, events and historic sites to take advantage of. See you soon!