The Best Campgrounds and RV Parks in Nashville, Tennessee

Nashville Yogi Bear's Jellystone Park
"Good service and support staff. Clean rest and laundry rooms. Close to everything and sites are easy to get into. "
Nashville KOA
"Stayed at the Nashville KOA last year and it was great. The property is well maintained and they were adding new features. The site was a level pull thru with plenty of room for our 36' class A and our road. The shuttle bus picks you up at the campground to go to downtown Nashville. Will definitely return."
Nashville Shores Lakeside Resort
"Loved, Loved this campground. We stayed on site 34 FHU which is a waterfront view of the lake. Awesome is all can say about the view. The site was level, paved, and picnic tables in good shape and firepit. The waterfront sites the land does slope down to a fence which wasn't a big deal for us. We stayed Sun-Wed but the water park was only open on weekends (mid May) which made for a quiet stay whic"
Search Availability 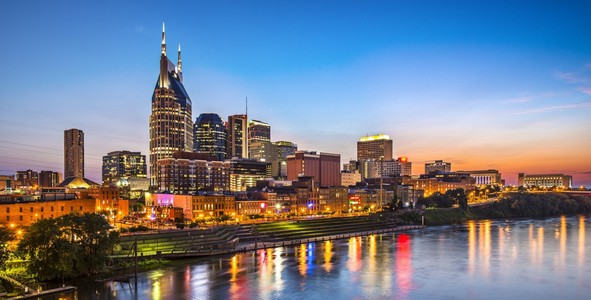 Nashville is the largest city in Tennessee and is known not only for its awesome cultural landscape, but also for its warm summers and mild winters. The city is a center for the music, healthcare, publishing, banking and transportation industries, and home to numerous colleges and universities. It is known as a center of the country music industry, earning it the nickname "Music City, U.S.A."

Thousands flock to Nashville each year and for a good reason: Nashville and country music are almost interchangeable. Most visitors head to this part of Tennessee to attend live performances of the Grand Ole Opry, the world's longest-running live radio show, or the Country Music Hall of Fame and Museum, another major attraction relating to the popularity of country music. The Gaylord Opryland Resort & Convention Center, the Opry Mills regional shopping mall and the General Jackson showboat, are all located in what is known as Music Valley.

Nashville has several arts centers and museums, including the Frist Center for the Visual Arts, Cheekwood Botanical Garden and Museum of Art, the Tennessee State Museum, the Johnny Cash Museum, Fisk University's Van Vechten and Aaron Douglas Galleries, Vanderbilt University's Fine Art Gallery and Sarratt Gallery, and the full-scale replica of the Parthenon.

There's several popular attractions that are must-dos for anyone visiting Nashville:

1. Hit the Hall - kick off your Nashville experience with a day at the Country Music Hall of Fame and Museum. The world’s largest popular music museum offers ever-changing exhibits featuring the legends of country music past and today’s hottest stars.

2. Visit The Parthenon - In Nashville’s Centennial Park, you’ll find the world’s only full-scale reproduction of the ancient Parthenon in Athens, Greece. The Parthenon houses an art gallery and museum as well as Alan LeQuire’s Athena Parthenos. Standing at almost 42 feet in height, Athena is the tallest indoor sculpture in the Western world. Just a mile from The Parthenon is the LeQuire Gallery, where you can visit Alan in his studio and witness one of the nation’s premier sculptors.

3. Take In A Songwriters-In-The-Round Show — One of the most unique ways to hear music in Nashville is at a songwriters show. Typically called a “writers night,” songwriters are put somewhere they are not used to being — in the spotlight. Several singer/songwriters will play ‘in-the-round’ as they sit on stage accompanied only by a microphone, a guitar, and their immense talent. These shows can be found in small, intimate clubs all over town, including the famous The Bluebird Cafe in Green Hills and downtown’s The Listening Room Cafe.

4. Outdoor Concerts - Music steps outside in the summer. Events like Musicians Corner at Centennial Park, Full Moon Pickin’ Parties at Percy Warner Park Equestrian Center, Bluebird on the Mountain, Music in the Vines at Arrington Vineyards, and Live on the Green at Public Square Park bring the high notes to the great outdoors. Head to Riverfront Park for a concert at the Ascend Amphitheater and take in the incredible views of downtown and the Cumberland River.

5. Nashville's Newest Sounds — Honoring musicians from stars to studio players that represent all genres of music, the Musicians Hall of Fame and Museum is housed in the Nashville Municipal Auditorium. From Hank Williams, Sr. to the Red Hot Chili Peppers, Motown to Southern Rock – there is truly something of interest to everyone. Pay homage to the Man in Black at The Johnny Cash Museum located on 3rd Avenue. Featuring the most comprehensive collection of Johnny Cash artifacts and memorabilia in the world, this is THE Cash venue to visit for all ages. Then stroll up to the George Jones on 2nd Avenue, which offers visitors a never-before-seen look into the life and career of the musical icon.

There's no shortage of world-class events held in Nashville every year, most of them revolving around the city's spectacular music-scape. Summer in Nashville is a season full of festivals, food, and, of course, live music. The CMA Music Festival might just be the hottest ticket in town as country music stars take the stage for four days in early June, and the CMT Music Awards also take place during the downtown festival. Celebrate America’s birthday with food, family fun, and multiple days of live music along the banks of the Cumberland River during Let Freedom Sing! Music City July 4th. Other popular events include Tomato Art Festival, Wine on the River, Shakespeare in the Park, Music City Hot Chicken Festival, African Street Festival, Iroquois Steeplechase, Southern Festival of Books and the Rock 'n' Roll Nashville Marathon. Be sure to also check out the Nashville Sounds baseball games, Triple-A affiliate of the Oakland A’s, at the new First Tennessee Park in Germantown.

Nashville is no stranger to RVers looking to enjoy the best of southern music, and one of the best spots is the Two River Campground located just two miles from Opryland. A well-maintained and well-managed park, the Two River Campground is close to a number of attractions such as the Nashville Nightlife Dinner Theater, where travelers can enjoy lively country music and variety shows featuring local and nationally recognized artists. There's also popular spots like the Adventure Science Museum, The Parthenon, The Hermitage, Country Music Hall of Fame, Tennessee State Museum and the Nashville Zoo. The Belmont Plantation, James K. Polk Home and the Tribute to Elvis Show are especially popular. Amenities at the RV park include: RV hook-ups, concrete patios, game rooms, grocery stores and gift shops, pool access, restrooms, showers, a playground, propane, WIFI and exceptionally friendly service. Nashville is also home to a number of excellent public parks with a plethora of clean and well-maintained tent sites, picnic tables and grills to enjoy. Whatever type of RVer you are, you'll feel at home camping in this city!

While Nashville has long been known for its music scene, its culinary scene is garnering attention of its own. Food & Wine highlighted the “booming Music City food scene,” Food Arts Magazine noted the “emerging culinary scene putting Nashville on the gastronomic radar,” and Local Palate featured the “impressively diverse culinary scene busting at the seams.” You can find Nashville’s authentic flavors in many areas of town such as Germantown, East Nashville, The Gulch, Midtown, 12South, Downtown, and Hillsboro Village. Each neighborhood has its own personality and welcome all walks of life.

Some popular spots include: Etch Restaurant, Rolf and Daughters, The 404 Kitchen, The Stillery and the Kayne Prime Steakhouse. And of course, there's a number of excellent local breweries for you to sample local flavors, such as Jackalope Brewing Company, Tennessee Brew Works, Smith & Lentz Brewing and Bearded Iris Brewing.

Civil War history is important to the city's tourism industry, and with that, sites pertaining to the Battle of Nashville and the nearby Battle of Franklin and Battle of Stones River can be seen, along with several well-preserved antebellum plantation houses such as Belle Meade Plantation, Carnton plantation in Franklin, and Belmont Mansion. There's also spots like Historic Travelers Rest Plantation & Museum, The Parthenon and the Fort Negley Visitors Center.

There's so much history, culture, food and music to enjoy in Nashville, make it your next vacation destination. And be sure to bring  your tent! Hope to see you soon!