The Best Campgrounds and RV Parks in Santa Cruz, California 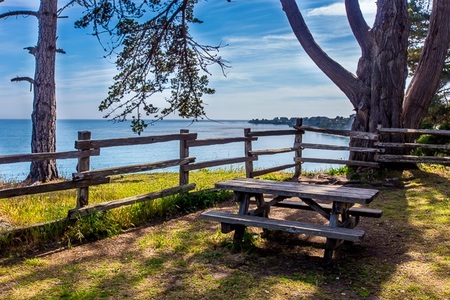 Santa Crus, Spanish for "The Holy Cross," is a great spot for an authentic and exciting California vacation. The city is known for its moderate climate, natural environment, coastline, redwood forests and alternative community lifestyles, but is especially popular for its excellent camping options, local attractions, eateries and nightlife. If you're look for a mix of urban adventures and outdoor exploring, Santa Cruz is your next best bet!

Santa Cruz is a city with a soul, and is home to dozens and dozens of art galleries and cultural products and expressions. You can look forward to popular sites like The Last Supper Wax Sculpture which is a life-size wax replica of Leonardo Da Vinci’s masterpiece, The Last Supper. After touring carnivals and county fairs for decades, it ended up at Santa Cruz Memorial cemetery where it can be viewed by appointment. You can also enjoy the excellent sounds from local talent at places like the Santa Cruz County Symphony, Cabrillo Festival of Contemporary Music which is an annual festival of contemporary music, or dive into the area's stellar performing arts through Santa Cruz Shakespeare, an annual summer festival where Shakespeare plays are performed live, and the Santa Cruz Film Festival which is a festival for independent filmmakers to share their work with film enthusiasts. For even more art, there's the Open Studios Art Tour/Fair and a number of galleries like the Santa Cruz Art League, Sesnon Art Gallery, r.blitzer gallery and the Felix Kulpa Gallery showcasing the contemporary and classic styles that originated in the area.

You can also look forward to the Santa Cruz Farmers Market, a year-round outdoor markets celebrating the agricultural diversity of the Central Coast region with a strong emphasis on sustainable agriculture and organic food production. Regional specialties include strawberry, apple, artichoke, artisan goat cheeses and brassica and the main market is held downtown on every Wednesday.

For travelers who would rather explore the city's nightlife, Santa Cruz is home to some of the state's best bars, clubs and entertainment spots. Santa Cruz is home to a vibrant live music scene, comedy, DJ nights, karaoke, theater and dance with performances every night of the week. There's also world-class jazz at the Kuumbwa Jazz Center, indie-rock at The Crepe Place, world music at Don Quixote's and the latest bands and DJs at The Catalyst Club, Moe;s Alley and The Crow's Nest at the Santa Cruz Harbor. The county's lively arts scene comes alive at night with monthly First Friday arts events in downtown Santa Cruz and weekly events at the Tannery Arts Center. Outside of the city of Santa Cruz, Capitola-by-the-Sea, Aptos and the SantaCruz Mountain communities of Felton and Boulder Creek offer an assortment of nightlife activities for a memorable night out.

As a coastal city, Santa Cruz is known for it's breathtaking waterside views, and one of the most popular past times among locals is discovering the newest tidal pools at low tide. Not only will you catch breathtaking views of the sunset over the ocean, but as those amazing oranges and reds melt away into a starry night, you can find living pools on the beach, with thriving ecosystems and happy oceans creatures. Look out for starfish, octopi and barnacles at spots like Pleasure Point, Wilder Ranch, Santa Maria’s and Natural Bridges State Beach.

Santa Cruz is also known as an active town with plenty of opportunities for visitors and locals alike to get and stay active. Breathe in fresh air while enjoying skateboarding and bicycling, hiking and rock climbing. Local parks also offer opportunities for birding and butterfly watching. Water sports are also popular in the city, so get ready for world-class sailing, diving, swimming, stand up paddle boarding, paddling, and pro-tip, Santa Cruz is known as one of the world's best spots for surfing, so be sure to hit the waves during your camping trip. There's also the Santa Cruz Wharf which is known for fishing, viewing marine mammals and other recreation.

One of the city's most popular events is its weekly art affair, drawing hundreds of locals and travelers each week. On the first Friday evening of every month, Santa Cruz galleries, shops, and cultural venues showcase the works of the city's notable and budding artists, and with a block party-like vibe, the multi-venue event provides an opportunity to discover local creative talent in a fun and festive setting. The event also offers a ton of excellent food an drink options, yummy cheese-and-wine-filled spreads, speciality cocktails like the delicious Mexican Mules at Home/Work and a rotating Stripe-tini at Stripe.

Other popular events include the O'Neill Cold Water Classic which is an annual surfing event at the popular Steamer Lane, Wharf to Wharf Race, and annual race, and Woodies on the Wharf, a yearly woodies show that takes place on the Santa Cruz Wharf.

Though the city is right on the coast, its food options aren't just limited to seafood and daquiris. You can experience menus influenced by Italian, Mediterranean, Hawaiian and even East Indian chefs, and restaurants like Pono Hawaiian Grill, Aldo's Harbor Restaurant, Mozaic and La Posta are especially popular among locals. You can also enjoy excellent local brews at spots like Santa Cruz Ale Works, Santa Cruz Mountain Brewing, Lupulo Craft Beer House and the East Cliff Brewing Company. No matter your preference, you're sure to find excellent dining and drinking options in this beautiful town!

Santa Cruz is a popular spot for RVers and tent campers, so be sure to scope out your options and book early before everything fills up! One of the most popular spots is the Santa Cruz Redwoods RV Resort, which is nestled among acres of thriving Redwoods, and offers plenty of fresh air and wide, open spaces for hiking, biking and exploring. There's also opportunities for walking the Santa Cruz Beach Boardwalk, skateboarding, streetball courts, surfing, disc golf, canoeing, wine tasting, kayaking and bird and whale watching. Amenities include: a bathhouse, a clubhouse, fire pits, shows, laundry facilities, full hookups, big rig access, pull thrus, cable TV and WIFI. There's also other campgrounds like Beach RV Park, Santa Vida RV Park, Santa Cruz Harbor RV Park and Santa Cruz Ranch RV Resort, as well as a ton of excellent public campsites at the Twin Lakes State Beach, Lighthouse Field State Beach, Friends of Santa Cruz State Parks and Sunset State Beach. No matter your camping preference, there's plenty of great options for comfortable and distraction-free accommodations.

The city is home to several great landmarks, such as the Bigfoot Discovery Museum which is surrounded by the towering forests of Henry Cowell Redwoods State Park. Bigfoot buffs can watch videos, marvel at oversized plaster footprint casts, and note recent sightings on a wall-sized map of the region. There's also the Fair Avenue Temple, a fantastical property that looks like the ruins of some secret society gathering spot with an elaborate archway flanked by two obelisks. The site is actually the former residence built by brothers Kenneth and Raymond Kitchen in the early part of the 20th century. But since the unusual property has sat empty for decades, urban legends have swirled. And these are only two of the many amazing historical sites Santa Cruz lays claim to.

Hope to see you at this beautiful coastal city for your next camping trip!