The Best Campgrounds and RV Parks in Los Angeles, California 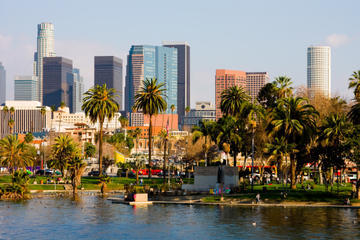 Known not only as the "City of Angels," but also the cultural, commercial and economic center of Southern California, Los Angeles is a beautiful city and known for its welcoming spirit toward outsiders. The town enjoys a Mediterranean climate and vibrant ethnic diversity, giving it a charm that's irresistible among RVers and locals alike.

Los Angeles is often billed as the "Creative Capital of the World", because one in every six of its residents works in a creative industry and there are more artists, writers, filmmakers, actors, dancers and musicians living and working in Los Angeles than any other city at any time in history. This translates into some absolutely stellar shows, concerts and performances on a full creative calendar. Travelers can look forward to performing arts hubs like The Los Angeles Music Center is "one of the three largest performing arts centers in the nation," which sees more than 1.3 million visitors per year. The Walt Disney Concert Hall, centerpiece of the Music Center, is home to the prestigious Los Angeles Philharmonic. Notable organizations such as Center Theatre Group, the Los Angeles Master Chorale, and the Los Angeles Opera are also resident companies of the Music Center.

Los Angeles is also a hotspot for history and its preservation, so if you love America's past and the history of it's immigrants and residents, you'll fall in love with LA. There are 841 museums and art galleries in Los Angeles County; in fact, Los Angeles has more museums per capita than any other city in the world. Some of the notable museums are the Los Angeles County Museum of Art (the largest art museum in the Western United States), the Getty Center, the Battleship Iowa and the Museum of Contemporary Art. A significant number of art galleries are located on Gallery Row, and tens of thousands attend the monthly Downtown Art Walk throughout the year.

On a more casual side, the City of Angels is home to no shortage of excellent attractions for visitors and locals of all ages to enjoy.

Los Angeles is home to a plethora of great attractions, and the bustling metropolis never really goes to sleep. In a city like that, visitors have to put a little distance between them and the town to find true peace and quiet. Most local campgrounds are just outside city limits, the most popular being the Balboa RV Park. Campers there can look forward to a plethora of nearby attractions, including: Ripley's Believe It Or Not Hollywood, Warner Brother VIP Tour and The Getty Museum. There's also the Pantages Theater, the Malibu Coast, the Kodak Theater and the Aquarium of the Pacific. With all of the beauty and culture of Los Angeles surrounding the campground, many visitors spend more of their days exploring, but they're always assured a return to comfortable and well-maintained campground. Amenities at the park include: laundry facilities, restrooms, WIFI, a recreation hall, full hookups and exercise facilities.

The County of Los Angeles Department of Parks and Recreation also has a number of beautiful camping facilities. Campers can head out to one of the local public campgrounds and enjoy a variety of fun recreational activities including hiking, biking, swimming, boating, and sleeping under the stars. For tent, RV and group camping, reservations are required. No matter what the preference is, there's plenty of options for campers looking to enjoy an outdoor experience in the City of Angels.

In a city as multi-cultural as LA, there's an oasis of options when it comes to dining. With world-class chefs making a name for themselves in the city, and international influences on every block, it's no wonder than many head there each year to explore the culinary landscape. Visitors can look forward to Italian, German, French, Thai and Mediterranean influences, as well as local American spots and seafood restaurants. Some well-known eateries include: Bestia, Wurstküche Restaurant, Bottega Louie and Republique. There's also Guisados, The Boiling Crab, Daikokuya, Sushi Gen and Perch. And of course, there's a ton of excellent dessert shops, bars and breweries to enjoy. Boomtown Brewery, San Antonio Winery, BUZZ wine beer bottleshop & bar and The Honest Abe Cider House & Meadery are popular breweries, but there's dozens more to enjoy during your visit.

Los Angeles is home to a battery of excellent, iconic landmarks that's not only steeped in the area's history, but also it's present status as one of America's biggest entertainment hubs. RVers can make their way through the Venice Canal Historic District, Italian-inspired artificial canals built in 1905, with sidewalks & bridges for pedestrians, or the J. Paul Getty Museum, an art museum in California. There's also the Natural History Museum of Los Angeles County, a popular attraction holds more than 35-million artifacts, Olvera Street, a historical district in downtown Los Angeles, and a part of El Pueblo de Los Angeles Historic Monument and the Peterson Automotive Museum, a vast collection of autos including restored antiques, race cars & vehicles from famous movies. Melrose Avenue is a shopping, dining and entertainment destination in Los Angeles that starts at Santa Monica Boulevard, at the border near Beverly Hills, and is another landmark spot, as is Wilshire Boulevard is one of the principal east-west arterial roads in Los Angeles, California, extending 15.83 miles from Ocean Avenue in the city of Santa Monica. Whatever a visitors' taste, there's something interesting, beautiful, fun or historic in Los Angeles to enjoy.

For those who are still looking for an RV Rental in Los Angeles check out Motorhome Republic.