The Best Campgrounds and RV Parks in Phoenix, Arizona

Wild West Ranch and RV Resort
39.8 miles away from Phoenix.

Desert Sands RV Park
"My family stayed at Desert Sands RV Park and it was absolutely wonderful. All of our neighbors were super nice and advantageous. Both of our children really enjoyed playing in the pool to cool off in the summer time, I can not count the numerous times we were all relaxing at the pool. We had such a blast BBQing with the neighbors and enjoying each others company. There was lots of space and the RV"
Search Availability 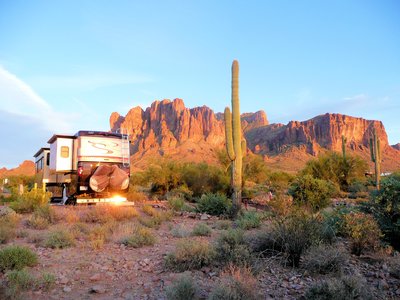 Known as the Valley of the Sun, Phoenix is the capital of Arizona, and enjoys a subtropical desert climate. As a desert region, many outsiders assume that Phoenix is an intolerably dry place with no growth or wildlife, but residents and visitors can paint a different, more beautiful picture of the area.

For the kids and kids-at-heart who enjoy interacting with outdoor small creatures, Phoenix is a great spot for wildlife viewing. The city is an oasis of flora and fauna, and while some can be found within Phoenix city limits, most are found in the suburbs and the undeveloped desert areas surrounding the city. Native mammal species include coyote, jackrabbit, antelope ground squirrel, mule deer, ringtail and coati. There are many species of native birds, including Costa's hummingbird, Anna's hummingbird, Gambel's quail, Gila woodpecker, mourning dove, white-winged dove, the roadrunner, the cactus wren, and many species of raptors, including falcons, hawks, owls, vultures, and eagles, including the golden and the bald eagle.The area is also home to a plethora of native reptile species including the Western diamondback rattlesnake, Sonoran sidewinder, several other types of rattlesnakes, Sonoran coral snake, dozens of species of non-venomous snakes, several types of whiptail lizards, the chuckwalla, desert horned lizard, Western banded gecko, Sonora mud turtle, and the desert tortoise.

Due to its natural beauty and climate, Phoenix has a plethora of outdoor attractions and recreational activities. The Phoenix Zoo is the largest privately owned, non-profit zoo in the United States, and has developed an international reputation for its efforts on animal conservation, including breeding and reintroducing endangered species back into the wild. Right next to the zoo is the Phoenix Botanical Gardens acclaimed worldwide for their exhibits and educational programs, featuring the largest collection of arid plants in the U.S. The South Mountain Park, the largest municipal park in the U.S., is also the highest desert mountain preserve in the world. Other popular sites in the city are: the Japanese Friendship Garden, Historic Heritage Square, Phoenix Mountains Park, Pueblo Grande Museum, Tovrea Castle, Camelback Mountain, Hole in the Rock, Mystery Castle, St. Mary's Basilica, Taliesin West and the Wrigley Mansion.

Phoenix is also known for the exciting urban area of Copper Square, coming to life every day and night with world-class entertainment, food and hospitality. If you're an urban explorer, you'll love the more than 21 entertainment venues in the area, including museums, theaters, 5 major sports organizations including the Phoenix Suns, Arizona Diamondbacks and the Phoenix Mercury. More than six of Arizona's performing arts companies call Copper Square home, including the state's major symphony, opera, ballet, and theatre companies, and you can look forward to enjoying dinner, dancing, live music, with more at over 90 restaurants and bars operating within Copper Square. And of course, no city is complete with a twice weekly farmers market, bringing fresh produce, hand crafted foods, and unique local crafts right to locals and travelers.

If you enjoy an easy-going game on the greens, Phoenix is the perfect place to unwind and golf under a warm, mid-afternoon sun. The city boasts five 18-hole championship courses, three 9-hole courses strategically located throughout the city, plus the grounds are over-seeded annually for optimum playing conditions. There's also full-service golf shops, full amenity practice facilities, equipment rentals and PGA/LPGA teaching professionals.

You can also look forward to excellent opportunities for outdoor fun such as fishing at one of the city's excellent stocked ponds at Cesar Chavez (Alvord Lake), Cortez, Desert West, Encanto, Papago, and Steele Indian School. For the adrenaline junkie, get ready for some world-class biking - mountain biking is allowed on all trails, except for the summit trails on Piestewa Peak and Camelback Mountain. Below are some of the more popular Phoenix trails for mountain bikes: the south Mountain's Desert Classic Trail, Phoenix Mountains Preserve Trail 100 and all of the trails at the Papago Park. In the southern Sonoran Preserve, popular mountain bike trails include Dixie Mountain Loop and the more technical Great Horned Owl Trail.

In addition to the sites of interest in the city, there are many attractions near Phoenix, such as the Agua Fria National Monument, Arcosanti, Casa Grande Ruins National Monument, Lost Dutchman State Park, Montezuma's Castle, Montezuma's Well, and Organ Pipe Cactus National Monument. Phoenix also serves as a central point to many of the sights around the state of Arizona, such as the Grand Canyon, Lake Havasu (where the London Bridge is located), Meteor Crater, the Painted Desert, the Petrified Forest, Tombstone, Kartchner Caverns, Sedona and Lowell Observatory in Flagstaff.

Phoenix is renowned for its Mexican food, thanks to both its large Hispanic population and its proximity to Mexico, and many of the city's eateries have a long history, stretching back into the early days of the area's first modern settlement. With landmark eateries setting a high standard, immigrants to the area have all brought in their flavors and cultural influences, maintaining the regions reputation for fresh foods, creative menus and excellent service. Visitors and locals alike can look forward to Korean, Cajun/Creole, Greek, Hawaiian, Irish, Japanese, Italian, Persian, South Asian, Spanish, Thai, Chinese, southwestern, Tex-Mex, Vietnamese, Brazilian and even French flavors, for an international-styled, culinary experience. Some popular restaurants include: L'amore Italian Restaurant, Christopher’s and Crush Lounge, Bluewater Grill Seafood Restaurant & Market and Islands Fine Burgers & Drinks. There's also Islands Fine Burgers & Drinks, Mi Patio Mexican Restaurant, The Henry and Gojo restaurant. Whatever your preference, you're sure to find a number of excellent spots in the city!

As a city known for its outdoor beauty and excellent attractions, many visitors opt to go camping during their stay, so if that's you, you're in luck because Phoenix boasts a host of excellent campgrounds. Of them, the Desert Sands RV Park is one of the most popular spots, boasting convenient access to excellent shopping, dining, entertainment and countless attractions. The park is only a short drive to a wide range of things to do including sightseeing, golfing, galleries, spectacular spas and sporting events, as well as energetic nightlife with club, movie theaters, fountains, gardens, and walkways leading to concerts, street fairs, and live theater. Amenities at the park include: WIFI, cable, pool access, 50 amp sites, restrooms, showers, full hookups, picnic areas, big rig access and barbecue grills.

Phoenix is a hidden gem in the camping world and is increasingly seeing more visitors and campgrounds being built, so be sure to plan your trip early and reserve a camping spot soon. Hope to see you soon!