The Best Campgrounds and RV Parks in Portland, Oregon

Columbia River RV
"Stayed August 24 thru 28th. Park is mostly permanent people. Cement pads are so tight there is no room to barely park your vehicle next to the trailer. No picnic tables (no room). No shade in park. Laundry was old and expensive. Pretty close to Portland. Columbia River is across the street. Very noisy with traffic noise and planes going by all day. Wouldn't recommend. - Review provided by RV Park "
Search Availability 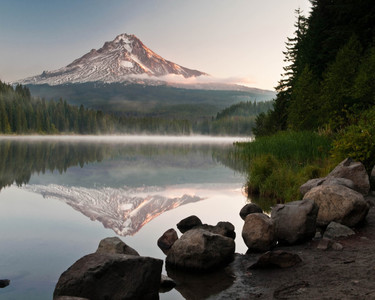 The city of Portland is a port and largest city in the state of Oregon, boasting a temperate climate with both Mediterranean and ocean features. Locals and visitors alike can look forward to fresh sea breezes, a bustling nightlife and excellent green spaces, rivaling other urban metropolises like Seattle and San Francisco. No matter your vacation style and preference, you're sure to find a ton of great activities and attractions in Portland to make your next getaway truly memorable.

In 2013, the Guardian named the city's music scene as one of the "most vibrant" in the United States, competing with Austin - the live music capital of the world. Evidence of this is found in Portland's position as home to famous bands such as the Kingsmen, Paul Revere & the Raiders, the Dandy Warhols, Quarterflash, Everclear, Pink Martini, The Hugs, Sleater-Kinney, the Decemberists, and the late Elliott Smith. According to the New York Times, the dozens of karaoke bars in Portland make it a hotspot for and "the capital of karaoke" in the United States but Portland is also home to a range of classical performing arts institutions, including the Oregon Symphony, Portland Opera, and the Portland Youth Philharmonic. The city is also home to several theaters and performing arts institutions, including the Oregon Ballet Theatre, Northwest Children's Theatre, Portland Center Stage, Artists Repertory Theatre, Miracle Theatre, and Tears of Joy Theatre, which means that if you're an art aficionado with a love for live performances and great music, Portland is a great place to be.

Not a huge live music fan? Portland’s fun and unexpected attractions also range from gardens and museums to retailers of coffee, doughnuts and books. Here are a few definite must-sees:

Enjoy a distinctive experience at Portland Saturday Market, the nation’s largest weekly open-air arts and crafts market. You can  stroll down row upon row of unique creations made by the people who sell them, and enjoy live music and international snacks. .

At the Oregon Zoo, you can travel around the world in an afternoon, observing more than 2,000 animals from around the world, from agouti (a rainforest rodent) to zebra. This conservation zoo is renowned for its Asian elephant breeding program.

Widely considered one of the world’s finest farmers’ markets, the Portland Farmers Market operates eight weekly markets, spring through fall. In addition to fresh produce, the market is a go-to spot for prepared food items, as well as cheeses, meats, flowers and more.

Located in Old Town’s popular nightlife district, Voodoo Doughnut is one of the city’s most unusual and delicious culinary destinations. The doughnuts, topped with creative ingredients such as bacon, Captain Crunch and Oreos, are almost as fun to look at as they are to eat. Locals and visitors line up 24 hours a day for what may be the most innovative doughnuts in the world.

Portland’s International Rose Test Garden is the oldest official continuously operated public rose test garden in the United States. Each year hundreds of thousands of visitors from around the world enjoy the sights and scents of the gardens. The garden’s spectacular views and more than 8,000 roses make it one of the city’s most notable signature landmarks. Located in Washington Park. The best rose-viewing months are May-September.

You can also look forward to excellent urban adventures such as the Oregon Museum of Science and Industry, Willamette River, Tom McCall Waterfront Park and the Hoyt Arboretum. There's also the World Forestry Center, Oregon Rail Heritage Center, USS Blueback,The Freakybuttrue Peculiarium and Museum and the Rice Northwest Museum of Rocks and Minerals. Plus, the city is known for a bustling nightlife, filled with clubs and bars that pour great dance music out onto the filled streets. You can expect spots like The Barrel Room, Landmark Saloon, Dante's and the Doug Fir Lounge to be great spots to enjoy the city's urban charm.

For a true Portland experience, visit during any one of the area's excellent fun or culture-focused events. You can always expect the shops to open later and bars to serve signature cocktails and brews during annual events like Portland’s Waterfront Blues Festival for live blues and jazz on the water or shores, fourth of july celebrations steeped in local flair, Portland’s World Naked Bike Ride and the Portland Beer Week. There's also seasonal events such as springtime whale watching, the Beer and Wine Fest, Soul'd Out Music Festival, the Corn Maise on Sauvie Island, Portland Queer Film Festival and the West Coast Giant Pumpkin Regatta. No matter your entertainment preferences, you're sure to find at least a few great attractions and festivals in Portland for lasting memories and a fun vacation.

Portland is a cultural oasis, and that's evident in it's culinary landscape almost more than in anything else the city offers. Visitors and locals alike can indulge in craft foods, fresh ingredients, creativity that pushes past cuisine norms and dozens and dozens of healthy, on-the-go meal options. The city is a culinary treasure. With influences from the city's countless immigrants, you can expect flavors from Thailand, Southeast Asian nations, France, Mexico and even Peru. Some popular eateries include: Little Bird Bistro, Ataula, Ava Gene's and Jake's Famous Crawfish. There's also well-known spots like:

Leave it to Portland to elevate a collection of food carts to the next level. Tidbit Food Farm and Garden on Southeast Division has all of the delicious eats you’d expect from the city’s legendary food carts, and adds a beer garden and boutique shopping for good measure. You can sample from an astounding variety of global cuisine, including steaming ramen bowls, Filipino pork stew, candied bacon burgers, Scandinavian sausages, waffle sandwiches and more.

A trip to Portland isn’t complete without a visit to the city’s oldest restaurant and bar, Huber’s Cafe. Locals have been coming in for their famous turkey dinners and signature Spanish Coffees since Huber’s opened in 1879.

This community-focused donut shop in Northeast Portland pairs delicious, made-to-order mini doughnuts with homemade chai, and you can order a tasting flight of five chai flavors, along with a plate of their famously tiny treats. The doughnuts arrive still warm from the fryer and decorated with an assortment of toppings, including thick Nutella drizzles with pink Himalayan sea salt; Meyer lemon and pear butter; candied bacon and maple syrup; raw, local honey and more.

Portland is home to a ton of fun, entertainment, great food and hospitality, but that doesn't mean that it doesn't get down to basics; camping is popular in the city, though you'd find plenty of options just on the outskirts of the city. One of the most popular private campgrounds it Barton Park, right on the Clackamas River. Travelers can look forward to excellent water sports like paddle boarding, canoeing and kayaking, as well as great views of the sky for stargazing at night. Hidden in untouched forestry and enjoying fresh air and breezes, this park is the perfect spot for unwinding and enjoying time away from the hustle and bustle or every day life. Amenities at the park include: a boat ramp, walking trails, a bunkhouse for rent, water and electrical hookups.

There's also a ton of excellent public campgrounds, with the Trillium Lake Campground drawing the most patrons each year. Right on the river, the park offers plenty of space for exploring, and plenty of water acreage for boating and fishing. There's also hiking trails, picnic tables and grills for group fun and amenities like picnic areas, water and toilets. There's private and public parks for every type of camper, so you're sure to find something that suites your preferences.

A city full of history, Portland is lucky to have residents so dedicated to preserving vestiges of the region's past. History buffs welcome!

Some of the most popular sites include:

The Pittock Mansion is located in the West Hills of Portland and soars 1,000 feet above the city’s skyline. A century-old symbol of Portland’s dramatic transformation from a small lumber town to a bustling city, the site is a true architectural wonder. With picture-perfect views of rivers, forests, bridges and mountaintops, no other place in town offers a more breathtaking view or a more revealing glimpse of Portland’s past.

The Portland Art Museum is internationally renowned for exciting art experiences, and is located in the heart of downtown’s cultural district. The museum campus includes an outdoor sculpture court and historical interiors, and you can tour the world and travel through history in magnificent permanent collection galleries featuring an extensive collection of Native American art, six stories of modern art and special exhibitions.

You can also explore Oregon’s fascinating history at the Oregon Historical Society in downtown Portland. The museum includes over 85,000 historical pieces, including Native American artifacts, memorabilia from Portland’s 1905 Lewis and Clark Exposition and you can learn about the Oregon Trail period and early settlements and industries, along with nationally focused exhibits.