The Best Campgrounds and RV Parks in St Louis, Missouri

St. Louis RV Park
"Very convenient to most St. Louis attractions, friendly helpful owners/hosts, nice clean shower area. Seems safe, maybe because there’s a police station close (across the street?) and maybe because the park is hidden behind hedges. No picnic tables in the spaces, though."
Casino Queen RV Park
"On the Casino Grounds, separated by huge parking lot and gate/fence. Pro: closest camp ground to Down town St Louis, with in walking distance to metro (train) stop. It is a glorified parking lot, but the intent is for you to enjoy casino, not "camp". The is 24 hour security in a van patrolling the camp ground and casino grounds. They will shuttle you across big lot if needed. Not a great part of "
St. Louis RV Park
"This is the only RV Park in downtown St. Louis. It has FHUs. We would stay here again if in St. Louis due to the location. It is convenient to go to a Cardinals game or other downtown activities. The area of town where the park is located is not the greatest but the park feels fairly safe. At least we never felt unsafe. The sites are very small and close together which is a downside. - Review prov"
Search Availability 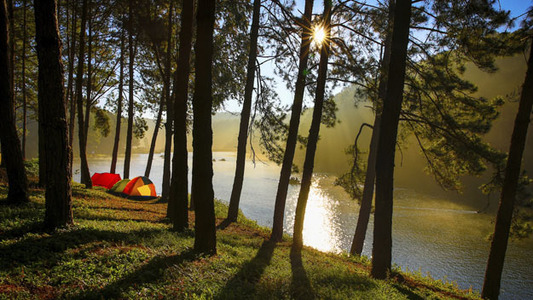 St. Louis RV parks and St. Louis campgrounds run from the city itself to well outside the metro area. There is plenty to see and do in the states of Missouri and Illinois, but the city of St. Louis itself plays host to many great attractions that outdoors enthusiasts enjoy.


Today it’s known as the gateway to the West, but St. Louis was once the last stop before entering the unknown western United States. The city also served as a launching point for families and fortune seekers headed to California during the gold rush. Lewis and Clark began their trek to the Pacific from St. Louis, and the city’s role in westward expansion is commemorated with the famous Gateway Arch, located downtown. At 630-feet-tall it’s hard to miss, and the area in which it’s located offers a number of side attractions for visitors. Those interested can even take an elevator to the top of the Arch for a spectacular view of the St. Louis metro area and the Mississippi River.


St. Louis campers and RV enthusiasts know that the summers mean 100-degree temperatures and very humid days and nights. As such, Float Trips down one of the area rivers or streams is a popular activity to stay cool and beat the heat. Just a few miles outside of St. Louis is the city of Eureka, which is the home of Six Flags St. Louis, a theme park with rollercoasters, carnival booths, rides, and activities for the whole family. Six Flags Hurricane Harbor is a popular water park that neighbors the amusement park. Doors are open in the summertime.


While the mighty Mississippi River is not a good spot for carefree tubers, there are a number of charters and river boat cruises operating out of St. Louis for folks to experience the backbone and lifeline of midwestern America. Climb aboard a restored paddleboat and experience the area’s history as it was in the days before the advent of the gasoline engine.


St. Louis is a crossroads, through and through. If the Mississippi River is the ultimate authority on travel from north to south, the world famous Route 66 would be its counterpart between east and west. One of America’s best-known and most important “asphalt rivers,” Route 66 runs through St. Louis, and extends east to Chicago and all the way west to Santa Monica, California. Many of the road’s best-known attractions are a short drive from the St. Louis metro area.