The Best Campgrounds and RV Parks in New Orleans, Louisiana

French Quarter RV Resort
"Stayed 2 nights at the French Quarter RV Resort and loved it. The staff were great, the resort was super clean and the proximity to the French Quarter was amazing. I expected the noise level to be high due to I10 but surprisingly we slept very well. "
Three Oaks and A Pine RV Park
"The property was well kept. We felt very safe there. It was close enough to the city for site seeing. Thumbs up!"
Three Oaks and A Pine RV Park
"Great customer service. Love clean rest room."
Three Oaks and A Pine RV Park
"Perfect for what we needed. Caring friendly staff Safe place , did not worry about RV while touring New Orleans Wide spaces for backing in. Secure and well lighted. "
Parc D'Orleans
"My family had a very lovely time here. The staff was very nice, friendly, and accommodating. There were some very large and spacious sites to choose from that was nice to see. There were so many great amenities that took care of our needs. They did have a lot of fun activities that was not only a lot of fun but was very relaxing for all of us. I really enjoyed the location as there were so much in"
Jude Travel Park
"My family had a very lovely time here. The staff was very affable and accommodating for a lot of our needs. There were a lot of great sites to choose from that were adequately spaced apart. They had a ton of great amenities that were more than what we needed! The pool and spa they had were really relaxing and calming. Everything in the park was nicely maintained, especially the utilities! (That’s "
Three Oaks and A Pine RV Park
"My family had a very lovely time here. The staff was very caring and attentive to our needs. The sites were spacious, adequately spaced, and were back in’s only. There were only spaces for RV so no tent camping, yet they were very family and pet friendly. I liked how the pets were free! There was a nice passcode gated entry that made us feel safe. The whole place was nicely maintained and everyth"
Pontchartrain Landing
"Most expensive place we have stayed (65.00 per night) and the worst park. They advertise a shuttle, you pay $6.00 round trip and it only runs 4 times a day. They advertise free internet, we were right by offices and could not get service. No hot water in showers. Very we'll maintained. - Review provided by RV Park Recommendations & Reviews Facebook Group"
Jude Travel Park
"This is a very nice park. You are apx 6 miles from the French Quarter but they offer shuttle service to and from for half the cost of a taxi. Jude is also priced very reasonable (much cheaper than staying downtown) The owners are on site and very helpful. The park is gated so no worries about security. We will def stay here again. - Review provided by RV Park Recommendations & Reviews Facebook Gro"
French Quarter RV Resort
"5 blocks from bourbon street & about 9 blocks from the super dome ! They run a shuttle bus to the super dome (for games/events) & they'll take you & pick you up 3 blocks from bourbon street. Its SAFE, QUIET (surprisingly so, considering the proximity to i-10) and SPOTLESS/CLEAN. They've got a nice saltwater swimming pool, lots of washers & dryers and clean private showers ! - Review provided by RV"
Search Availability 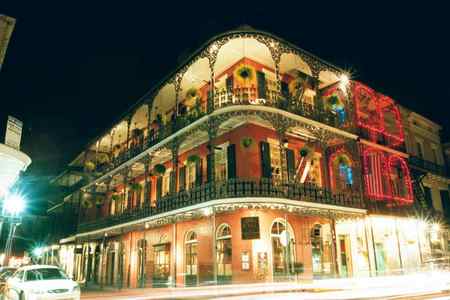 The City of New Orleans' love affair with the cultural arts has a long and distinguished history, dating back to the earliest years of the French settlement in the 18th century. Few Western nations have a greater appreciation for live performance than France and, when they began colonizing the New World they imported their culture to New Orleans.

Like all of the other major performing arts, dance has a deep-rooted tradition in New Orleans. The city is home to the Marigny Opera Ballet, a professional, resident dance company that offers a full season of performances along with the New Orleans Ballet Association, which presents some of the world’s finest modern and contemporary dance companies. The New Orleans Ballet Theatre presents an annual summer concert, and the Delta Festival Ballet stages an annual production of Tchaikovsky's Nutcracker around the Christmas holidays.

While cultural events are offered year-round in New Orleans, the height of the the cultural arts season traditionally begins in September and runs through May of the following year. The Louisiana Philharmonic Orchestra usually christens the season with live performances in September, along with some of the city's live theaters which may also stage shows that month. The season kicks into high gear by October when the New Orleans Opera Association and the New Orleans Ballet Association begin mounting their main stage productions. The Opera Association puts on four major productions a year, with two performances of each opera, and the Ballet Association stages five major productions of one night each – occasionally, two. The Philharmonic and live theaters continue staging their performances throughout the season.

In one of the oldest cities in America, Bourbon Street is rich with historic venues, social tales and iconic buildings. With a walk down Bourbon Street you are bound to hear music on every corner that will make you want to dance the night away. But if you’re looking for some good old-fashioned jazz, you’ll find it at Fritzel’s European Jazz Club. Located in an almost 200 year-old building, Fritzel’s hosts live traditional jazz performances on every night of the week! Plus of course, there's no shortage of excellent bars, shops and restaurants to keep you fueled during your time there.

Removed from the glitzy neon lights and blaring cover music of Bourbon Street is a compact musical district where the locals hang out. Frenchmen Street is just walking distance away from Bourbon and the French Quarter. Its most popular section is a two-block stretch in the Faubourg Marigny neighborhood, which is known for its wide variety of live music on any given night of the week! With one trip around the clubs on Frenchmen, you are likely to hear anything from jazz to Latin to blues to reggae, and just about everything in between - inside the clubs and even outside on the street, you’ll hear some of the best live music produced anywhere in the city. After all that music and dancing, you’ll find a number of late-night eateries that are open along Frenchmen Street and in the adjacent Faubourg Marigny neighborhood. At the end of the night (or even the beginning) this area has plenty of dining options to satisfy your munchies. In addition to the delicious late night food and incredible music, Frenchmen Street also has its own authentic art market. In the midst of some of the most famous music clubs, the Frenchmen Art Market is the place to go to experience local art and crafts that are distinctively New Orleans. Stop by this late night market and take home a small piece of Nola art to remember your visit.

The Gulf Coast is one of the most popular places to fish in the country, and New Orleans is just minutes from some of the best angling spots you can find. In addition to Barataria Bay, some of the area’s best fishing locations are the freshwater lakes, which allow you to cast from the shore or from your boat according to your preference. Lake Pontchartrain can be pretty rough during windy conditions, but it’s well known for the amazing array of fish that make their homes in its waters. Find the clearest and cleanest water and stay close to the marshy areas if the wind is high; here, you can catch trout, drums, and reds. Also nearby are Lake Borgne, Lake Salvador, and three wildlife management areas. Local guides offer inshore fishing charters for flounder, redfish, and speckled trout, as well as marlin, red snapper and more varieties for offshore anglers.

Apart from fishing, there's acres and acres of green spaces within the city that's perfect for hiking, biking, walking and exploring, plus, there's several stables in the city for equestrian adventures through the city.

A city like New Orleans is bound to have a long list of excellent events and festivals so when you get there, prepare for a full calendar of public fun. Here are a few local favorites:

Bastille Day is commemorated throughout New Orleans, but the main festival takes place at the New Orleans Museum of Art. Enjoy live music, food and drinks to toast the memorable occasion. This is a family-oriented event with fun things for the kids, including French-themed arts and crafts and a puppet show.

On the last weekend of September and every weekend during October, visitors can enjoy a piece of Germany in the heart of New Orleans at the Deutsches Haus in the Rivertown section of Kenner. Oktoberfest celebrates German heritage with: live traditional music and German folk dancing, German wines and liquors, the Oktoberfest parade and foods like sauerbraten (braised marinated roast beef), krautwickel (ground beef stuffing rolled in cabbage) and bratwurst sausages.

Held annually at the Audubon Zoo, Soul Fest is a celebration of African American food, music, crafts and culture. Especially soul food and soul music. Soul Fest goes beyond the usual festival-type fair by highlighting the achievements and heritage of African Americans, and it promotes healthy living via a health fair offering free screenings. There are also special events just for kids at Soul Fest that involve fun, creative activities and opportunities for learning more about African-American culture and history.

New Orleans is home to a number of excellent hotels and bed and breakfasts, but it's also a great spot among RVers. Pontchartrain Landing is one of the most popular camping spots, right on the edge of the lake. This campground is the perfect vacation spot just 12 minutes from the French Quarter or famous Bourbon Street on the corner of the Intercoastal Navigational Canal and Lake Pontchartrain, and a perfect place to dock your boat or jet ski next to your villa or RV site and enjoy immediate access to fun on the lake or bayou. Pontchartrain Landing is a luxurious, yet casual park with a swimming pool, hot tub and daily shuttle to the French Quarter. The Lighthouse Bar and Grill has live music and great food specializing in BBQ and local cuisine with a friendly staff. Other amenities include a convenience store, closed circuit surveillance security system and daily shuttles to the French Quarter and special events. The other RV parks are equally as great, so whatever your preference, you're sure to find something you'll love when camping New Orleans.

A favorite stomping ground for both visitors and locals is Jean Lafitte's Blacksmith Shop located on the corner of Bourbon Street and St. Phillip Street in a creole cottage. The walls of this bar and restaurant are full of legends, mystery and days of old New Orleans. The building itself was built sometime before 1772 and is said to be where the Lafitte brothers opened their blacksmith shop as a façade so they could carry out their privateer efforts.

Another cultural staple of Bourbon Street is The Old Absinthe House building, which was originally built in 1806 as a family-owned importing firm. As years went on, the ground floor became a saloon where in 1874 mixologist, Cayetano Ferrer, created the famous Absinthe House Frappe. Today, you can still experience this celebrated drink. The decorative marble fountains that were used to drip cool water over sugar cubes into glasses of Absinthe can still be found in this historic bar.

The intersection of Bourbon Street and St. Ann Street begins the section of Bourbon that caters to New Orleans’ thriving LGBTQ+ community. Lafitte-In-Exile is the oldest gay bar in the country and Tennessee Williams was a frequent visitor during his time in New Orleans.

Hope to see you soon!