The Best Campgrounds and RV Parks in Pensacola, Florida

Leisure Lakes RV Park
"Great park and owner. On a small body of water for fishing and relaxing. Quite and out of the city"
Five Flags RV Park
"This was an excellent RV park. The sites were level, spacious, full hookups. It was clean, friendly, and safe. The location near Interstate 10 was very convenient. Everything you want in a park."
Green Haven RV Park
"My family had a very lovely time here. The staff was very kind, affable, and accommodating. There were a plethora of sites to choose from that were not only spacious but would fit any size rig or campers style. There were a ton of great amenities that took care of all of our needs. The location was beautiful as there were so many majestic views from all over the park and in the surrounding areas. "
Playa Del Rio
"Small, friendly park on the Old River but just across the two lane road to the beach with a private walkway to the beach. Boat slips too. All back ins. Small sites but the location is awesome! Bath house, laundry, small clubhouse right on the river; great happy hours and group dinners. Owners are wonderful and friendly. Located just past the famous FloraBama just over the AL/FL line, near Orange B"
Pensacola Beach RV Resort
"This is a very tranquil park! The staff was super nice and welcoming. The park had a really nice design and was nicely maintained. The facilities were always clean when we used it. I loved how many activities there was to choose from. There was something for all of us! The location was really nice as not only was the park right off the water there was so many places you can drive to in no time a"
Leisure Lakes RV Park
"This is a very nice and relaxing park. The name is perfect as you can do all kinds of leisure activities here, from a stroll to lying in the sun. The staff was so nice and very helpful. The sites they had were rather large and were able to fit my big rug. The amenities they offered was really nice, also not too much. They also had some great activities for all ages. This really is the place to com"
A & M Perdido Resort
"If you are looking for a camp that is by the Big Lagoon this is a perfect park. The location is amazing as it’s so close to the state park and the big lagoon. The price is a little high but with everything you get with it, it is worth it. There are a plethora of amenities to choose from and the staff is always hosting events to bring people together. The facilities are really nice and always cle"
Pensacola Beach RV Resort
"This is a fantastic campground for RV’s!! I don’t think I have ever seen as many spots to park my RV before. It was so great. Also a lot of the spots were right near the beach which what could be better than that? The campground had a lot of other activities to do than just swimming at the beach, but swimming was the most relaxing for us. I know if we are going to be passing through here on our "
Pensacola RV Park
"Oops I didn't meant to give this place a 3 star, its much more than that. My kitty walked on my keyboard before I could change the review. - Review provided by RV Park Recommendations & Reviews Facebook Group"
Search Availability 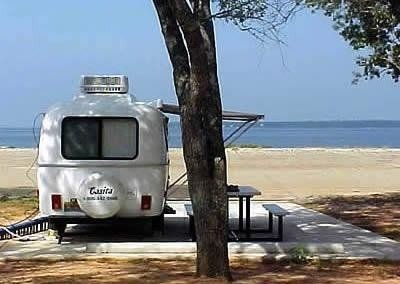 Pensacola is a city on the Florida Panhandle and enjoys a humid, subtropical climate. Because of its breathtaking natural terrain and green spaces, gorgeous beaches and wide, new skies, the city not only welcomes thousands of new residents each year, but even more excited, seafaring visitors. Whether you enjoy urban adventures and a bustling nightlife, or natural scenes that will take your breath away, Pensacola is the perfect spot for an authentic coast side getaway.

The Pensacola Bay Area is famous for its natural beauty and historic culture - yet it never stops accommodating the latest attractions and events. The Pensacola Bay Area offers many opportunities for both scuba diving and snorkeling in the emerald waters. From locations just off the beach to diving the world's largest artificial reef, the USS Oriskany. With water temperatures ranging from the mid-80s in summer to the mid-60s in winter, when visibility is generally at its best, diving is always in season in the Pensacola Bay Area. You can also enjoy dolphin-watching, but there's also the Pensacola Bay Area which is an angler’s paradise with the Gulf of Mexico. These three bays and the river is home to Florida’s most diverse freshwater fish population.

Pensacola is a wildlife-viewers paradise, and is an especially coveted spot among bird-watchers. the Gulf Islands National Seashore, which stretches for 9 miles on the western tip of Santa Rosa Island to Fort Pickens and several more miles east of Portofino Island Resort, boasts the largest concentration of nesting sea turtles and shore birds. You can expect species such as black skimmers, osprey, bald eagles, loggerhead turtles and kemp rileys. The beautiful clear water, sugar-white beaches and the sunshine are perfect for excellent water sports such as paddle-boarding, parasailing, surfing and sailing. Not familiar with ocean-sports? There's no shortage of experienced guides to give you as many lessons as you need!

For centuries people have been exploring the Pensacola Bay Area; by Native Americans before the historical era to the moment Tristan de Luna first hiked the shores of Pensacola Bay. Today you and your family can spend the day exploring historic forts, hike on the site of a 19th-century water-powered industrial complex, walk around a charming downtown area all while discovering the history of the colonial period. Some popular paths include: The Florida National Scenic Trail in Fort Pickens, the Pensacola Lighthouse and the Colonial Archaeological Trail.

Each Tuesday from April to October you can enjoy live music while the sun sets over the Gulf of Mexico at the Bands on the Beach concert series. A well-diversified line-up of local and regional artists take the stage at the beautiful Gulfside Pavilion on Pensacola Beach each week at 7 p.m. The event attracts thousands of fans throughout the season. Folks of all ages set up their lawn chairs, blankets, and picnic baskets, but for those less prepared, concessions and cocktails are available nearby. Whatever your style, the venue's beach backdrop, accompanied by a subtle island breeze, is hands down unparalleled.

The greater Gulf Coast area is home to some of the world’s most talented artists. From musicians to painters, sculptors to designers, ballet to songwriters – there’s no better place to enjoy a multitude of art forms. Festivals and events are abundant each year, as the Pensacola area celebrates local artists and welcomes those from around the globe. Local theaters also proudly host a variety of performances and events each year ranging from Broadway musicals to comedy skits, and everything in between. You can look forward to art galleries such as Life's a Beach art gallery, Piece By Piece: Art with LEGO Bricks by Sean Kenney and the Metaphor as Manifestation at the Pensacola Museum of Art. There's also shows, movie screenings and performances such as Saenger Classic Movie Series Presents: Seven Brides for Seven Brothers and the Saenger Classic Movie Series Presents: Cool Hand Luke.

The nation’s top artists, scenic views, a cool breeze, live music, a spirited crowd– blended together, these sensories make the Great Gulfcoast Arts Festival in Historic Downtown Pensacola one of the best-regarded, most popular arts festivals in the United States. The three-day, juried art show draws more than 200 of the country's best painters, potters, sculptors, jewelers, graphic artists, craftsmen and other artists. It is held each year beginning on the first Friday in November.

The annual Pensacola Seafood Festival takes over Seville Square, Fountain Park and waterfront Bartram Park in Historic Downtown Pensacola each fall, attracting more than 100,000 attendees during the three-day event that takes place the last weekend in September. From fried mullet – a local delicacy - to the area's world-famous shrimp and grits, Pensacola's seafood is some of the best in the world. Not only is it fresh from the Gulf, but it also has the benefit of the area’s wide range of culinary influences, from traditional southern and Cajun to the area’s French and Spanish flavors to the international flair brought to the area by our globe-trotting military population. At the festival, you'll find local seafood favorites prepared in a variety of ways by our top restaurants, live cooking demonstrations, traditional festival fair from the nation’s top vendors, arts and crafts vendors and live music.

As a coastal city, Pensacola sees a lot of great seafood chefs, but that's not all its culinary landscape is limited to. Whether you enjoy traditional American flavors or international influences, you're sure to fine more than a few eateries in this beautiful city that you'll enjoy. Some of them include: the Colonial Archaeological Trail, Jaco's Bayfront Bar & Grille and the Carmen's Lunch Bar. There's also Jackson's Steakhouse, Skopelos at New World, Franco's Italian Restaurant and the Ichiban. There's also a number of world-class bars and clubs to enjoy for a unique Florida cocktail after dinner.

With a pristine natural environment like Pensacola, it's no wonder visitors enjoying camping during their visit! Of the long list of great campgrounds in the area, the Pensacola Beach RV Resort is one of the most popular spots. It enjoys breathtaking coastal views, excellently manicured lawns and plenty of opportunities nearby for charter fishing, boating and dolphin-watching. There's also opportunities for  history site seeing at places like the National Naval Aviation Museum and the Pensacola Lighthouse Museum. And of course, there's excellent nearby eateries to catch a bite. Don't like seaside RV sites? The city has a host of other campgrounds farther from the sure, so if you enjoy luxury and convenient camping facilities, you'll have great options.

The Pensacola National Parks Service offers plenty of public campgrounds for you to enjoy, so if you prefer government-owned parks, you can definitely look forward to great amenities and locations. There's group sites, tent areas, picnic tables, toilet facilities and even grills, so if you want to rough-it during your camping trip, you're sure to find a public site that you'd like.

Pensacola isn known for its rich history, and well preserved sites, so it's no wonder there are quite a few local landmarks that sees plenty of visitors each year. The city is the site of the Vietnam Veterans' Wall South, and there are also a number of historical military installations from the Civil War, including Fort Barrancas. Fort Pickens is also in Pensacola and served as a temporary prison for Geronimo, and there is the National Naval Aviation Museum and Pensacola Lighthouse at NAS Pensacola.

With so much to experience and see, you'll want to head to this gorgeous spot for your next camping trip. Hope to see you soon!