The Best Campgrounds and RV Parks in Flagstaff, Arizona

Black Bart's RV Park
"Wonderful sites and nice staff. Climate was absolutely perfect; cool and breezy. Bathrooms and showers very clean. "
J & H RV Park
"Probably the best in the area. We stayed there three years ago and thought it was a well-run park. No pool. Just be prepared for the longest list of rules and no-no's you've ever seen in your life. It's "senior-oriented", so it's very quiet. - Review provided by RV Park Recommendations & Reviews Facebook Group"
Black Bart's RV Park
"This was a " sleeper" on our radar. Off 40 and E. Butler Road it was chosen bc AllStays App showed other in the area seasonally closed. Tall pines, gravel sites with stationary picnic tabes with FHUs was clean, pet friendly, a few season residents, but quiet and secure. Locked coded resturants and showers. Office/ gift shop/ store was already lite for the holidays as was a dinner theater on site. "
Search Availability 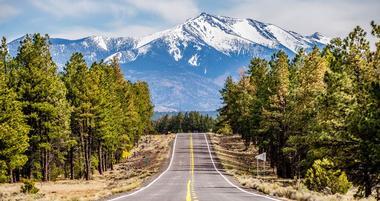 The city of Flagstaff is located in the beautiful state of Arizona and is a great spot for an authentic western, outdoor adventure. Campers can look forward to waking up everyday surrounded by the San Francisco Peaks, Mount Eden and the city is just 10 miles from Humphrey's Peak. Flagstaff enjoys a dry semi-continental climate which makes it perfect for enjoying outdoor adventures, and drawing in thousands of eager nature enthusiasts each year.

Flagstaff is immensely popular due to its proximity to the Grand Canyon National Park, Oak Creek Canyon, the Arizona Snowbowl, Meteor Crater, and historic Route 66. As one would imagine, the area is a magnet for outdoor enthusiasts, with a varied terrain, high elevation, and amenable weather attracting campers, backpackers, climbers, recreation and elite runners, and mountain bikers from all over the southwestern United States. The city is also a recreational hub for road cycling and mountain biking clubs, organized triathlon events, and annual cross country ski races. Several major river running operators are headquartered in Flagstaff, and the city serves as a base for Grand Canyon and Colorado River expeditions. Other nearby outdoor attractions include the Walnut Canyon National Monument, Sunset Crater Volcano National Monument, Wupatki National Monument, Barringer Crater, the Glen Canyon National Recreation Area and Lake Powell.

Flagstaff is a city with a thriving cultural scene, with not only visual arts pervading the cityscape, but plenty of performing arts centers and groups and musical groups. The town is home to the Flagstaff Symphony Orchestra, which plays concerts from September through April, and the area also attracts folk and contemporary acoustic musicians, and offers several annual music festivals during the summer months, such as the Flagstaff Friends of Traditional Music Festival and the Flagstaff Music Festival. The Pickin' in the Pines three-day bluegrass and acoustic music festival held at the Pine Mountain Amphitheater has gained increased popularity in recent years and well-known local bands play throughout the year at the Orpheum Theater, with free concerts held during the summer months at Heritage Square.

Flagstaff also has an active theatre scene, featuring several groups, many sprouting from university theater groups and educational programs. The season includes four main stage and numerous second stage productions and a summer collaboration with Theatrikos Theatre Company, a local community theater company founded in 1972. Since 1995, the Flagstaff Light Opera Company has performed a variety of musical theatre and light opera productions throughout the year at the Sinagua Middle/School auditorium, and there are several dance companies in Flagstaff, including Coconino Community College Dance Program, Northern Arizona Preparatory Company and Canyon Movement, which present periodic concerts and collaborate with the Flagstaff Symphony for free concerts during the summer and holiday seasons. Because of the presence and active work of so many performing arts group, travelers can expect a wealth of options if looking to explore Flagstaff's art scene.

A variety of weekend festivals occur throughout the year. The annual Northern Arizona Book Festival, held in the spring, brings together nationally known authors to read and display their work, and the Flagstaff Mountain Film Festival is held every October, featuring a variety of independent films and documentaries focusing on extreme sports, environmental issues and global topics. The festival is four days long and consists of several sessions of films, each held at the Orpheum Theater in the historic downtown area. The summer months feature several festivals, including Hopi and Navajo Festivals of Arts and Crafts, the Arizona Highland Celtic Festival, Pride in the Pines, and the Made in the Shade Beer Tasting Festival. For more than 20 years Flagstaff has hosted the 10-day Flagstaff Festival of Science in September, a family event which features open houses, lectures, informal talks, and hands-on activities at area museums, observatories, other scientific facilities and the university. The festival begins with the annual Eugene Shoemaker keynote address, and continues with guest speakers have included famous astronauts, arctic explorers, storm chasers, and scientists from many disciplines. The Coconino County Fair is held every September at the Fort Tuthill County Fairgrounds, featuring a demolition derby, livestock auction, carnival rides, and other activities. On New Year's Eve, locals and visitors alike gather around the Weatherford Hotel as a 70-pound, 6-foot tall, metallic pine cone is dropped from the roof at midnight.

Residents and visitors to Flagstaff can look forward to a full annual calendar of events with plenty to experience, see and taste regardless of the time of year. Some camper favorites include: the Dew Downtown Winter Festival, the Spring Farmer's Market and Car Show and the Armed Forces Parade. There's also the Flagstaff Fine Arts & Crafts Festival, Fridays on the Square Friday First Art-Walk, Marshall Suzuki Violin & Dance, Art in the Park, Northern Arizona Celtic Festival and concerts in the park. With a vibrant art and cultural scene, local universities and science and technology centers, there's no shortage of excellent local events to stimulate both the mind and the senses.

The Fort Tuthill Campground is one of the city's most visited private parks, and is a popular spot for travelers hoping to immerse themselves in the untouched beauty of Flagstaff's Ponderosa Pine forest. Near the campground, travelers can look forward to great attractions such as the Walnut Creek National Monument, Wupatki National Monument, Hatch River for water expeditions and the Lowell Observatory. RVers can also visit the Mother Road Brewing Company, Sunset Crater Volcano National Monument and the Lava River Cave. Amenities at the campground include: sewerage, water, dump sites and picnic tables. Many flock to Fort Tuthill each year to enjoy authentic Arizona camping so book early! For campers accustomed to public campgrounds, the city has no shortage of great parks. The Coconino National Forest is the most popular park, filled mainly with picnic tables, fire rings and dry tent sites to enjoy.

Flagstaff is a city filled with variety, and nowhere is that more visible than with its culinary landscape. Visitors flock to the downtown area in waves to enjoy local foods that serve flavors from all over the world; there are Italian, Latin American, Mexican, American, Indian and European tastes. Some traveler favorites include: Delhi Palace, MartAnnes Breakfast Palace, Coppa Cafe and Bistro and Karma Sushi Bar Grill. There's also Black Barts Steakhouse, Pita Jungle, Pizzicletta and The Northern Pines Restaurant.

The city is known for a few notable group landmarks, which all display the area's rich past. Route 66, which originally ran between Chicago and Los Angeles, greatly increased the accessibility to the area, and enhanced the culture and tourism in Flagstaff. In early September, the city hosts an annual event, Route 66 Days, to highlight its connection to the famous highway. Another well-known landmark is The Museum of Northern Arizona includes displays of the biology, archeology, photography, anthropology, and native art of the Colorado Plateau. The Arboretum at Flagstaff is another great spot; it's a 200-acre arboretum featuring 2,500 species of drought-tolerant native plants representative of the high-desert region.

For a trip through one of Arizona's most industrious and culturally rich regions, thousands head to Flagstaff each year. Wise travelers camp Flagstaff, so when you head out here, grab your mountain bike and tent, and prepare to wake up each day surrounded by breathtaking scenes and plenty of fresh air.