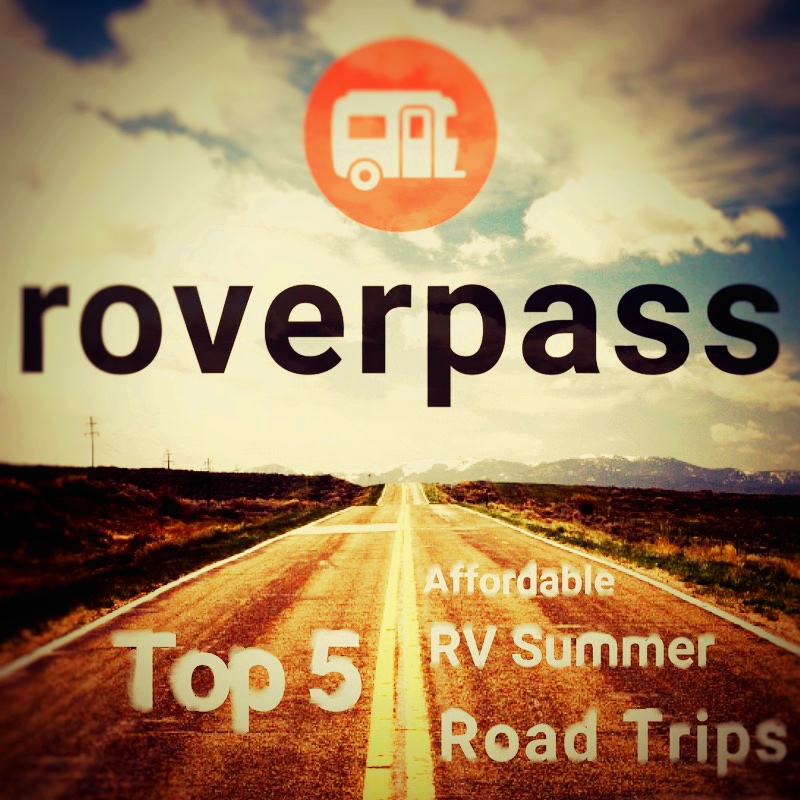 An affordable RV trip takes a good amount of planning. With both gas and airline ticket prices up, it’s becoming even more arduous to stay within your travel budget, whether domestic or international.

Aside from budgeting, planning a trip can involve many hours of research. You can’t just copy and paste any old itinerary off the internet; it won’t be tailored to your personal preferences.

If you’re like us, however, you think that planning the RV trip is half the fun. While we can’t give you a perfect, one-size-fits-all itinerary for an affordable RV trip, we can give you some destinations and other recommendations to be inspired by. Read on for the best routes to discover in your RV this summer.

If you want a lot of food for an affordable price, BBQ is your friend. And before you say it: yes, we weren’t able to fit Nashville, Memphis, or Kansas City into the route. They were simply too far out of the way. In lieu of these staples of BBQ, we went for something new.

Charleston is one of the fastest up and coming cities for BBQ in America. Best known for its pulled pork and buffet style BBQ joints, Dukes BBQ and Lewis Barbeque are our top picks for this small city known for its hospitality and tradition.

Next stop, Atlanta. Being a southern city with a metro population of nearly six million, no good Tour de BBQ could pass it by. Many of the best BBQ restaurants in Atlanta were founded by transplants from Tennesee and Texas, so the city has a neat mix of the two biggest BBQ breeds.

ATL might offer the most modern barbeque of any city in the states. The must get item here: pork ribs. We recommend heading to Fox Bros. Bar-B-Q for those. However, getting a sampler platter is still worth it. That way you can try a bit of everything, including unique sides like green tomato kimchi and tempura sweet potatoes.

Continuing west, our next stop is the much smaller city of Birmingham, Alabama. This is the only stay on our trip where the desserts trump the entrees. In Birmingham, you’ll find no shortage of great ribs, chicken, turkey, pork, and brisket, often with white sauce offered in addition to the usual red.

But the desserts are where it’s really at. Peanut butter pie. Or key lime. Half Moon Cookies at Full Moon Bar-B-Que. Or a wedge of carrot cake at Rusty’s Bar-B-Q. You really can’t go wrong.

Now we’ll head to a more traditional BBQ state, Texas. First stop: Dallas. Luckily, Texas Monthy has been rating the top 50 BBQ restaurants out of the thousands of options in The Lone State State since 1973, and they’re the best at what they do.

According to them, Cattleack Barbeque is the best in the city, backed by their well-marbled Akaushi pork ribs. Hutchins BBQ is another spot that’s second to none. There you can get “Texas twinkies” (brisket-stuffed jalapeños wrapped in bacon).

Last stop, our home city of Austin, Texas. We don’t need Texas Monthly’s report to tell you what’s best here. If you like BBQ, you know about Franklin Barbeque. People line up outside every day (except Monday, when it’s closed) and wait upwards for four hours for delicious, fatty brisket. Feeling impatient? Head to Micklethwait Craft Meats, La Barbeque, or Terry Black’s. 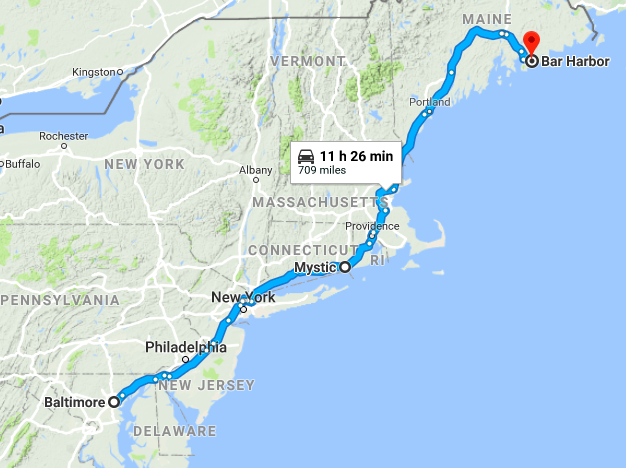 You might not think of a trip that goes through expensive cities like Philadelphia and New York City as “affordable.” However, we won’t be staying in those cities, just driving by them to enjoy the skyline (and maybe a bite to eat and some free attractions, if you so choose).

There are too many options to explore in this article for the first three cities on this route. We’ll leave filling the first half of your itinerary of this trip up to you and meet back with you at the halfway point in Mystic, Connecticut.

Now here’s a city you’ve probably never heard of. With a population under 5,000, why are we stopping here? We’re stopping here for The Mystic Seaport Museum, which attracts nearly 500,000 visitors a year. It’s home to the oldest surviving wooden sailing whale ship, The Charles W. Morgan.

The ship was built in 1841 in New Bedford, Massachusetts. The museum and marine also feature 60 original historical buildings and a fully refurbished 19th-century village.

Shortly after you leave Mystic, feel free to take a 30-minute detour through Newport, Rhode Island to view its extravagant mansions.

The majority of the Gilded Age mansions line Bellevue Avenue. Some are now museums, the most notable being The Breakers, an 1895 mansion resembling a Renaissance palace.

I’ll bet you didn’t think an east coast trip would include a stop in Portland. Portland, Maine, however, is an affordable city on the bay with a scenic downtown. Stroll through Old Port, where old warehouses are converted into shops and some of the finest seafood restaurants in the US. Portland also offers free concerts, beautiful beaches, 70 miles of hiking trails, and other awesome activities that won’t cost you a dime.

Final destination: Bar Harbor and Acadia National Park. Acadia’s ~50,000 acres of mountains, woods, and lakes has landed itself on the top ten most visited parks in the United States year after year.

It’s beautiful stone bridges, interwoven hiking trails and carriage roads, and charming lighthouses continue to bring in over three million travelers annually. Summer is the perfect time to visit, as you can expect temperatures with highs in the mid-70s.

You’ll see more of the I-90 further down on this list, but this route focuses on its stretch along The Great Lakes. This scenic, waterfront byway includes hundreds of miles just off the coast of Lake Erie. You could do the drive in a day but, obviously, we recommend taking several days and making day trips to attractions like The Niagara Falls (maybe you’ve heard of them).

Over 30,000 tons of water flows down The Niagara Falls every second. With all that water comes a tremendous amount of erosion. The falls are essentially moving backward six feet per year and, thousands of years ago, used to be several miles further downstream. There are many ways to view the falls, including The Cave of the Winds, Goat Island, and The Journey Behind the Falls. Our favorite is the classic Maid of the Mist.

The boats have been featured in films like Bruce Almighty and take passengers into dense mist from the falls. “Mist” is putting it lightly, as it will feel more like rain. Adult tickets are about $20, however, so we recommend The Rainbow Bridge (just $3.75) for a cheaper viewing option. During Summer Friday nights, it’s a great viewing point for both The Niagara Falls and fireworks!

You’ll also pass smaller (but still worthwhile) attractions like The Sodus Bay Lighthouse near Wolcott, New York. The stone lighthouse was completed in 1871 and is preserved in near-perfect condition.

When you’re needing a real restroom, it’s also a classier bathroom stop than a McDonald’s.

The rest of your drive includes over 50 state parks fairly close to the highway. We’ll highlight Presque Isle State Park, just outside of Erie, Pennslyvania.

The entire park is a peninsula in Lake Erie. It features excellent fishing spots and sandy beaches that are mostly untouched.

The rest of your drive includes larger destinations like Cleveland and Chicago. As before, we’ll leave you to decide how to spend your time in these cities. We figure you’ve already heard about The Rock & Roll Hall of Fame and Navy Pier. 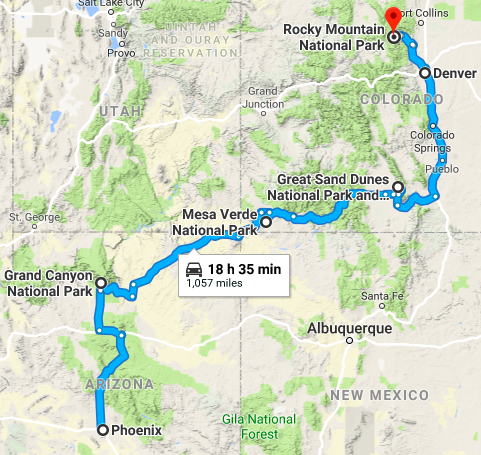 There are a ton of the nation’s best parks concentrated in Arizona, Utah, and Colorado. Sadly, we had to skip a few of our favorites along this route in order to keep stops close enough to each other (sorry, Arches 😢). Not to worry, a route that includes The Grand Canyon, Mesa Verde, The Great Sand Dunes, and The Rocky Mountains will be sure to impress. First stop, The Grand Canyon.

The layers of rock exposed in the canyons took nearly two billion years of Earth’s geological history to form. The Colorado River began its course through the area to begin eroding away The Grand Canyon about six million years ago. The best part about it: looking at it is free.

Next stop, the much greener Mesa Verde (Spanish for “tall flat rocks with trees on top”). This National Park is best known for its Pueblo Indian cliff dwellings.

The next attraction is not man-made but natural. At first glance, The Great Sand Dunes National Park and Preserves appear out of place.

You don’t usually see snow and sand in the same picture. I mean, who expects so much sand over 7,000 feet above sea level?

The formation of this desert in the sky is as provocative as the dunes themselves are to look at. The Great Sand Dunes are located in The San Luis Valley, surrounded by The San Juan Mountains and The Sangre de Cristo Mountains.

Over the past few thousand years, sand deposited by streams and lakes on the valley floor has been carried by strong southwest winds towards a curve in The Sangre de Cristo Mountains. This stretch of mountains creates northeasterly winds that cancel out the southwestern ones, leaving the sand to fall where it now lays, creating the tallest dunes in North America (~750 feet from the valley floor).

On the way to our last stop, The Rocky Mountain National Park, consider taking a day trip to explore the sights and sounds of Denver. Union Station, Larimar Square, and 16th Street Mall are all free to explore. In addition, The Denver Art Museum is free for kids and just $10 for adults.

Over 350 miles of trails traverse tundra, mountains, and meadows. You can drive your RV on Trail Ridge Road, the highest paved road in the US. It’s roughly 11,500 feet above sea level.

We saved the mother of all trips for last. Driving I-90 coast to coast is the longest stretch of highway in all of the United States. This drive will take you at least eight days, and that’s if you’re keeping sight-seeing to a minimum.

We’d recommend taking your time, though. Spend a few nights in Yellowstone National Park. Consider going a little out of your way to see Mt. Rushmore. All of the destinations highlighted in The Great Lakes Trail, like The Niagara Falls, are still great options.

Once you arrive in Seattle, there’s an ample amount of affordable outdoor activities. Olympic National Park, Mount Rainier National Park, and Capitol State Forest are all under two hours from Seattle. Each offers fantastic hiking trails, amazing views, and lots of camping options.

RVing makes travel more affordable. An expensive trip staying in hotels practically anywhere can become an affordable RV trip. By sticking to free or inexpensive activities and staying in smaller cities even when you’re visiting larger ones, you can go anywhere in the US on an affordable budget. Try one of the trips we highlighted and make it your own.

What’s your favorite affordable RV trip to take during the Summer? Leave a comment below!