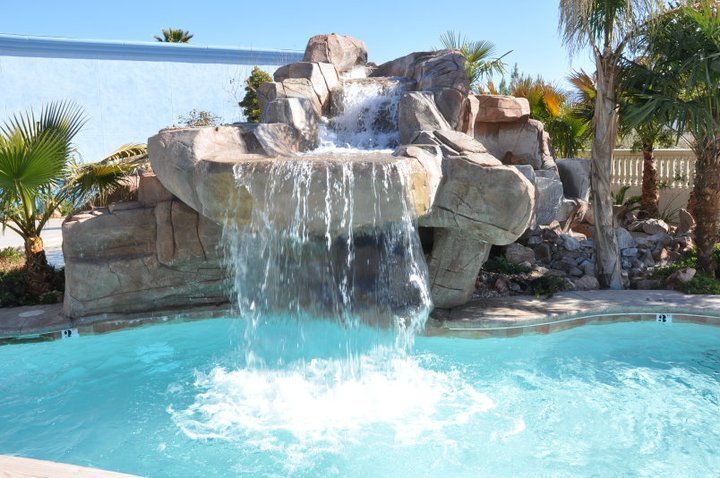 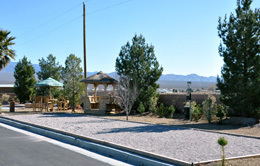 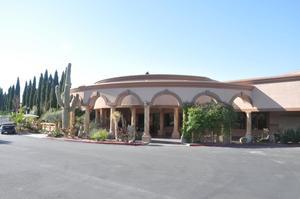 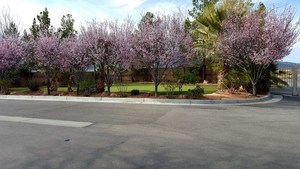 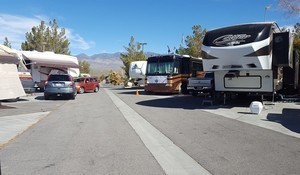 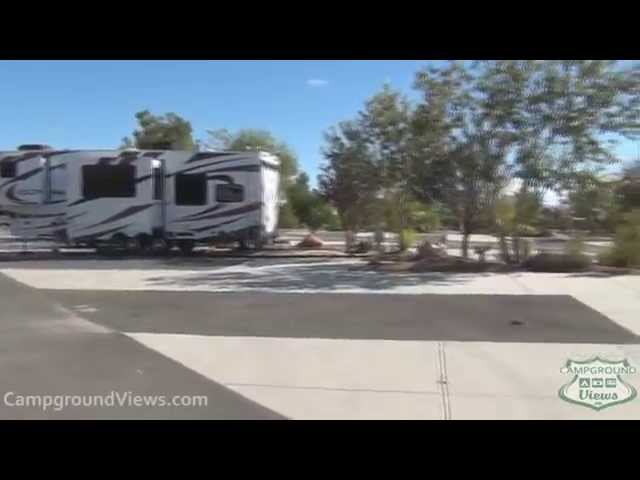 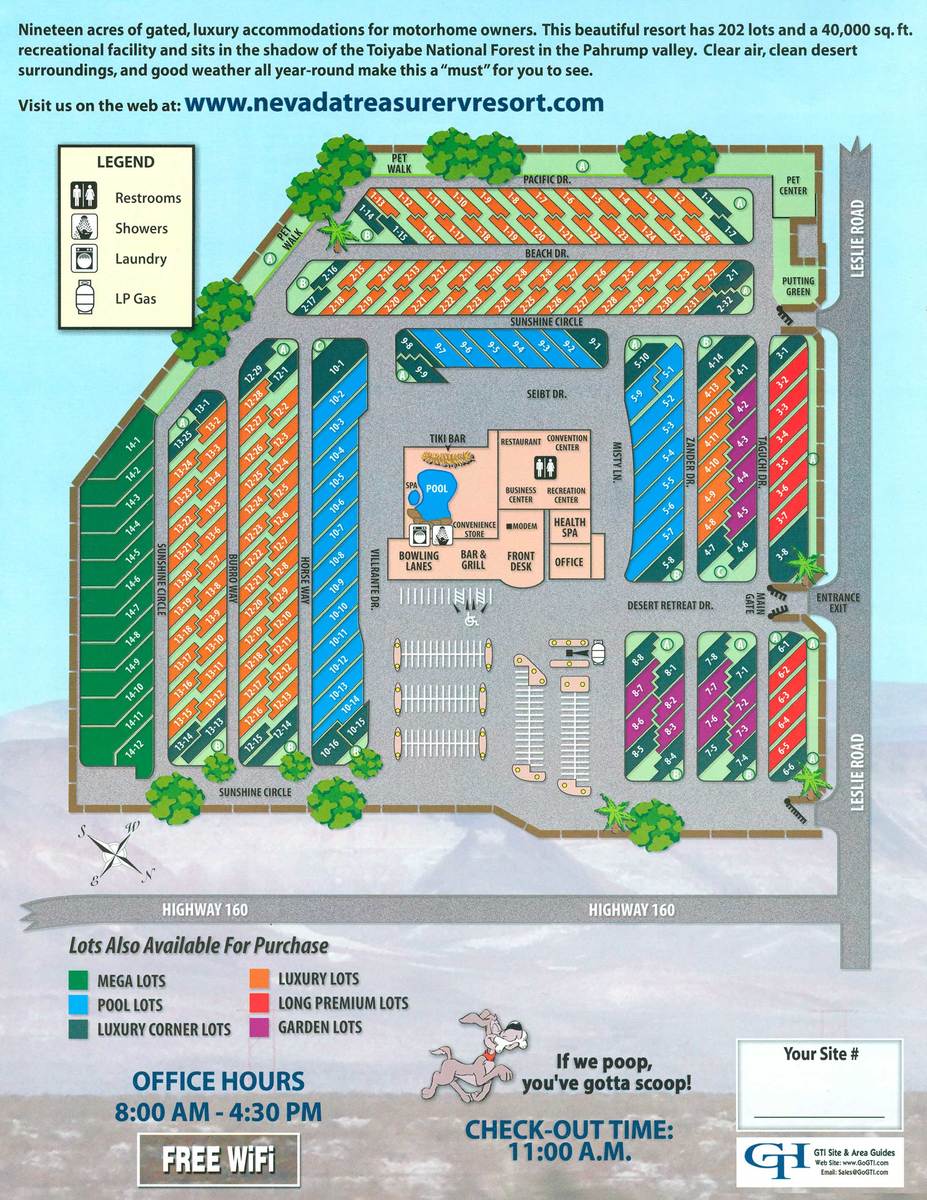 4.0
I was pleasantly surprised with my stay. I don't normally stay at the large RV resorts but glad I gave them a shot. The site's are rather tight so accept the help of the staff to back-in. Staff guide you to your site and are happy to help. The clubhouse is nice with a book and movie lending nook. The fitness center locker rooms almost feel like a spa experience. The pool was still too chilly for swimming so I enjoyed the hot tub instead. I would definitely return if in the Pahrump area.
March 24, 2022

2.0
Friendly staff, lots of gossip Open to public takes first place r.v visitors second. When you pay for a week but can not use pool because its rented out? Mark from restraint is something else when not selling drugs he is busy hitting on female guests when his wife is not visiting . Manager bill sees nothing and his wife is pleasant, concerns seem to be ignored . Gym is nice and lobby friendly Short stop is recommended, as the inner politics will get wear you out.
May 13, 2020

5/13/20 Sorry to see this review come across this morning, but this is an "old review" from past Ownership and Management. Mark's restaurant has been closed for over 4 months and Bill has been gone since 2018. Nevada Treasure RV Resort is under NEW Ownership and NEW Management since Nov 2018. We have a NEW restaurant getting ready to open within the next 1-2 weeks. Our Guests are always our # 1 concern and we strive to make sure everyone feels welcomed and enjoys their stay. We hope that you will come back and see the improvements we have made at the Resort. We're sure that you will enjoy your stay. Thank you, Management

1.0
Review on this property. 2018 1st Their is a unsettling Evil Spirit at this RV Park and confirmed, by the actions of management. They believe they are back in 1950 America when folks were told what to do. Front office woman is stressed as she would put it and has much hate. I (a )Reverend for the homeless and known for our work from Denver, Las Vegas, also my uncle the Governor and Vice President of the USA she and her team could not relate to Hispanic folks. So they came up with that I stoled soaps from some strange event that we never attended and that they had it on video cam. They even said they would file a Police report unless we returned soaps. Well when confronted they said oh we made a mistake as the video was not clear, so why then excuse anyone. When I told the manger Bill that we weren’t even home the whole day he said you are wrong we have you on video cam. Sad when we have folks like her and (the manager) who say they are great folks and have Christian values, but act like the devil. Trump or not, America is not going back to the 1950’s where minorities were on the back of the bus. Yes, I had to forgive these folks, but this experience cost us stress, money, and yes even some anger. I wondered why this was the only RV park that had many available spots and all the other 7 RV Parks were filled to Capacity, now I know why. Please think twice before coming here as the stress is not worth it, along with false accusations and the hate. As all these concerns were address to Jeffrey the Parks owner in San Diego (Dunham Mortgage Funds) and he would not give is the time a day, instead he allowed his manager to accuse us of theft. Poor ownership along with poor management, why must you have to complain daily of mail problems propane leaks, not working exercise equipment and the list goes on and manager who said we berate this woman in his office he confused berate with doing their job. We told Billy of gas smell and he said it’s nothing to worry about it will go away, 4 days later it got worse and he wonder why we keep on his staff, as once Kyle check it his statement was this is dangerous and wand trend the gas lines off. Not like staff or management this is not slander, but facts. And on a closing note I had to pray for this evilness and the folks that made false accusations against us, but as the word says we all must account for what we do on this earth, and we must love all, but more so those who we don’t agree with. We wonder why America is being torn apart and such hate today, when folks are lovers of self and believe we must be of one race. I personally have never experienced this racism as I have done many interviews in the media, but once you experience this, your only though is how and why do folks want one race, as folks of all nationalities is what makes America Great as God Himself Created All. Racism will not allow you to be in heaven as God the Lord of life says unless you love your neighbor you will not be with him in heaven. Think before you judge folks. Reverend Trey Jesus tells us in Matthew 5:44-45 – “But I say to you, love your enemies, bless those who curse you, do good to those who hate you, and pray for those who spitefully use you and persecute you, 45 that you may be sons of your Father in heaven; for He makes His sun rise on the evil and on the good…
January 14, 2018

5/13/20 Nevada Treasure RV Resort is under NEW Ownership and NEW Management. We have made a lot of new improvements to the Resort. Thank you, Management

3.0
We have been here for a week and are finding out that they do not cater to their RV customers so much as they do the public that can buy memberships to their gym, spa, and pools.It is nice enough but being open for the public is not good for the RV customers at all. Nice grill pretty good food. But we would not stay here again.No picnic tables weeds around seating areas. Was told we could pull the weeds. - Review provided by RV Park Recommendations & Reviews Facebook Group
February 01, 2017

5/13/20 Thank you for taking the time to leave a Review about your stay and I apologize for any concern with weeds, we do try to stay on top of them daily. Making sure that our RV Guests are comfortable and feel welcomed are always our # 1 concern. Our Gym memberships are important too, but our RV Guests always come first! I'm not sure when you stayed but the pool, spa and gym have been closed for 2 months due to the Covid19 and the Grill has been closed since the 1st of Feb. We are in the process of opening a NEW restaurant within the next 1-2 weeks which we are very excited about. We hope that you will come back and stay with us again. Please ask for the Manager or Asst. Manager when making your reservation. Thank you, Management